Trouble on the Cox Creek path… 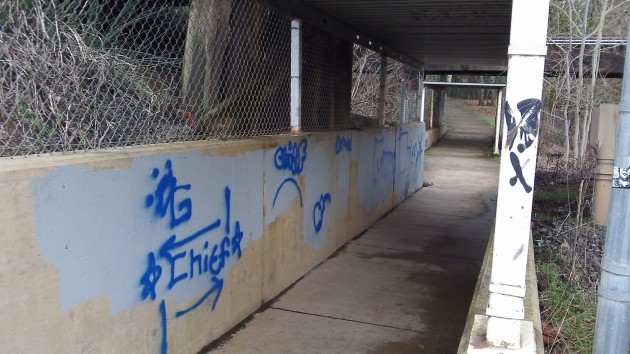 The Vandals of history were not as dumb as to do this.

It’s been at least a week since a vandal defaced the railroad underpass on Albany’s Cox Creek path. (Let me hasten to note right here that I realize that by following linguistic convention, I am unjustly defaming the Vandals. That northern tribe may have been among those who sacked Rome, but Rome had it coming. And afterward, if my childhood books are to be believed, the Vandals moved on to settle down in North Africa, being just as civilized as anyone else.) 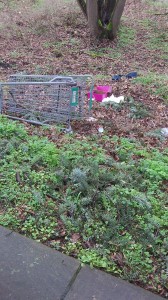 That underpass on the Cox Creek path sometimes serves as a place to rest for men who carry their belongings with them. These are not the criminals who tagged the underpass walls. They have no room in their meager packs for spray paint, and presumably they would not waste what money they have that way.

Besides, they are too well mannered to deface where they sometimes sit for a bite and to get out of the drizzle. They nod and smile at the passerby. Having parked their packs and carts on the path, they offer to move them for people just passing through. (It’s not necessary, for there’s a gap plenty big enough for mountain bike and rider.)

Farther along, one of this tribe has had a mishap. His cart is down the bank, and his stuff has spilled out, including a rolled-up sleeping bag. The next day the sleeping bag has been picked up but some of the rest remains, and so does the cart.

The Cox Creek path is no one’s idea of a fancy boulevard in need of constant prettyfying. But right next door, the public has spent millions on the Talking Water Gardens, and on the other side a couple hundred thousand on watershed restoration. The city regularly sweeps the path. As spring approaches, along with more visitors, it will want to keep it up and maybe even step up the pace. (hh)