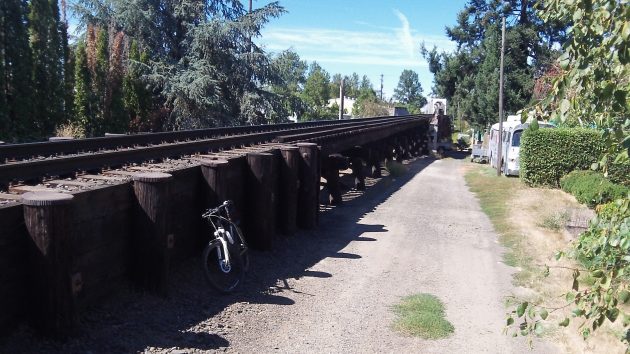 View from a block away shows why it’s impractical to just raise the First Avenue rail overcrossing.

Now that we’re talking about Albany’s infamous truck-eating trestle on First Avenue, why not solve the problem by lowering the street or raising the structure holding the track? Because while it sounds like the most straightforward solution, it’s impractical. If it were feasible, it would have been done long ago.

About 20 years ago, and then again more recently, the state highway people in ODOT discovered that many of the overpasses on I-5 were too low for modern trucks and mobile-home transports. So they lowered the freeway. Now, under most of the overpasses in the mid-valley, the pavement dips about a foot or so. But the same can’t easily be done on a city street without disrupting the driveway access of residential and business properties on the street, not to mention dealing with underground utilities.

Raising the railroad track is even less feasible. Unlike motor vehicles, trains can’t negotiate steep or short inclines. So the track would have to be raised for a long way on either side of the street crossing. That would probably entail reconstructing several grade crossings south of First as well as, to the north, the 1921 steel bridge that carries the track across the Willamette River.

Hare learned that at similar crossings elsewhere, crashes have continued despite ever more elaborate warning systems and devices. He said there’s a $200 gizmo truckers can use to warn them of any obstructions, but obviously the city can’t hand these things to everybody driving a truck through town who doesn’t have one.

Instead, Hare said the city would alert GPS providers to the existence of the substandard clearance on First. Further, “I would recommend continued investigation of low cost items such as increasing the intensity of existing flashing lights and the visibility of the overpass.  We will bring back a report to council when we have more information, but my initial look at the issue suggests we should avoid a major expenditure that probably would not eliminate the problem and almost certainly would increase liability.”

One piece of information lacking so far is a count of trestle crashes over, say, the last 10 years. Once that is in hand, in a year or two we should be able to tell whether crashes are reduced by whatever the city decides to do. (hh)