Trash patrol: One man’s quest to tidy up 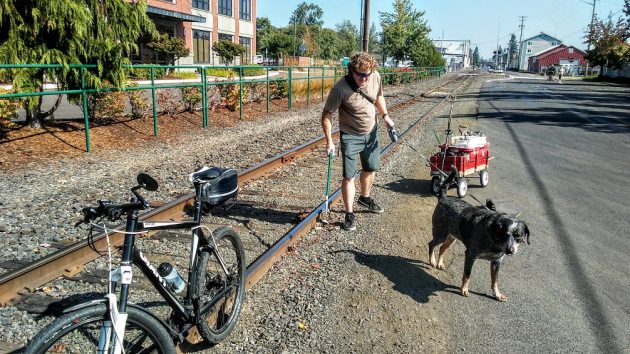 Accompanied by his dog Baloo, Russell Hawke cleans up along the tracks on Water Avenue Saturday.

If Albany’s riverfront looks more or less picked up these days, we can thank Russell Hawke. He often cleans up the trash others leave behind.

Hawke is an IT administrator for Providence Health Systems, and in 2018 he moved to a house off the Dave Clark Path in Edgewater Village. He kept a boat on the river below his place and soon started removing the trash he could see only from the water.

On a bike ride Saturday, I came across Hawke along the Portland & Western track on Water Avenue. Scooting along on an electric skateboard controlled by a remote in his pocket, and trailing a wagon, he would spot debris along the rails and collect it in a couple of buckets.

He told me he does this about once a week, patrolling the track and the Dave Clark Path.

His office is in Beaverton but like a lot of others he has been working from home because of Covid. Trying to keep his neighborhood free from roadside trash, he says, gives him something to do while walking Baloo, his 5-year-old dog.

When he finished his rounds Saturday, he said, he’d go back to where someone had dumped a shopping cart. He planned to throw it in the back of his truck and return it to Safeway.

Every once in a while the city of Albany sponsors an organized pickup in neighborhoods around town. But as Russell Hawke says — and as he shows by what he does — you don’t have to wait for an organized group activity to tidy things up near where you live. (hh)

The top caption in the original story has been corrected to fix a misspelling in Russell’s surname. 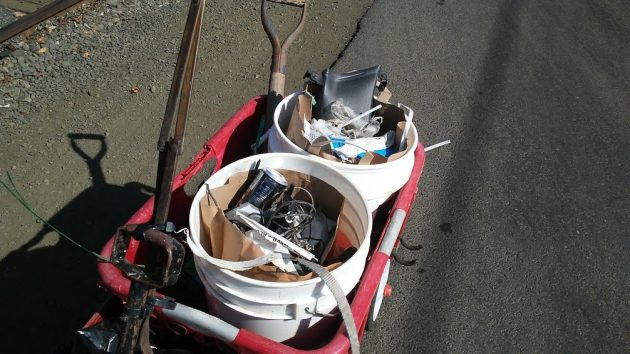 The haul from a day’s walk along the railroad tracks. 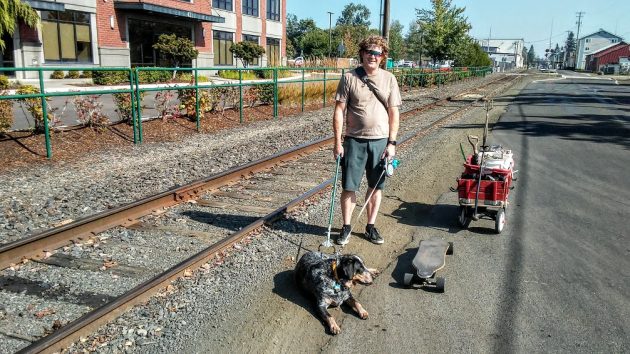 
7 responses to “Trash patrol: One man’s quest to tidy up”