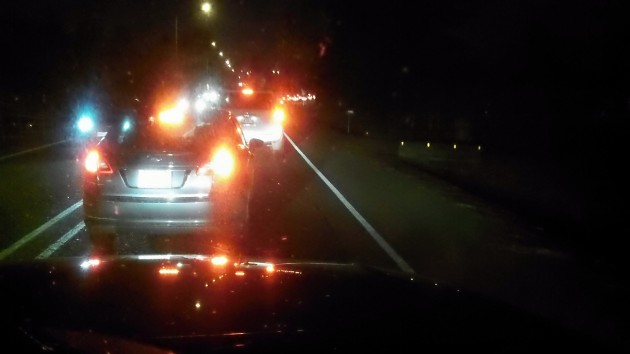 Saturday night on Highway 34: Nothing but brake lights,

Tonight’s question: Why do innocent travelers have to pay the price — getting stuck in a massive Corvallis traffic jam — just because a football game has just ended?

I can see why Beaver fans might put up with traffic paralysis after a game. After all, they volunteered their time. They wanted to be there. And if they have to sit in a long column of vehicles not going anywhere, they can pass the time by reliving the experience by thinking and talking about the game.

I can see, though, that this would be more fun if the team had won. But even contemplating another loss, debating the merits of this or that play, or this or that player, or the coach, should make for a lively diversion while they’re sitting there staring at nothing but brake lights ahead.

If, on the other hand, you’re just on your way home from the coast, say, and have to go through Corvallis because the highway builders have neglected to build a reasonable bypass, well, if that happens to you on a Saturday night in November, you are likely to end up on the disgruntled side. You may wonder why a university with big football ambitions hasn’t built a giant parking lot for 20,000 cars out in the country so that it could require fans to park there and then bus them to the stadium and back.

It’s not as though Oregon State has not caused problems enough with its hulking, expanding and super-sized presence in what used to be a nice little town: Perennial parking problems, the destruction of neighborhoods, not to mention the sharp skewing of politics toward the left. Do they have to block the public roads as well when the weary traveler just wants to get home? (hh)