Traffic fines — because they can 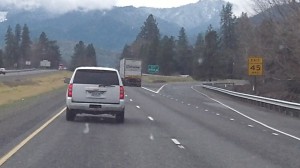 So what’s wrong with showing a little patience — on the freeway or in the legislature?

A couple of weeks ago I made fun of state Sen. Ginny Burdick’s bill to require drivers to use the right lane on multi-lane highways. But it did no good. Her colleagues in the Senate seem to like the bill. So unless good sense prevails after all, we may be stuck with yet another reason for cops to pull you over and give you a ticket. That’s what we need in this state — more traffic laws and more potential for punishment.

In the case of this bill, the maximum fine for not driving on the right would be $1,000. As usual, Burdick says her intention is not punishment but education. If that’s the case, why not drop the fine from the bill?

She told a Senate committee she had been frustrated by drivers in the left lane on her daily commutes between Salem and Portland. That’s a heavily congested part of I-5, with at least three lanes in each direction. Maybe, instead of fuming at drivers in the left lane, she should slow down. Or take the middle lane if there’s room.

On that stretch, by the way, the best way to go is not the right but the middle lane, which avoids having to change lanes at every on-ramp to make way to incoming traffic. Burdick’s bill would cause drivers to be changing lanes far more often than they have to do now.

But with our legislature, it is hopeless to expect some kind of restraint. Any little thing they don’t like, like going around a slower vehicle in front, they’re tempted to impose a fine. Why? Because they can. (hh)