“Toxics” in the water: What to do? 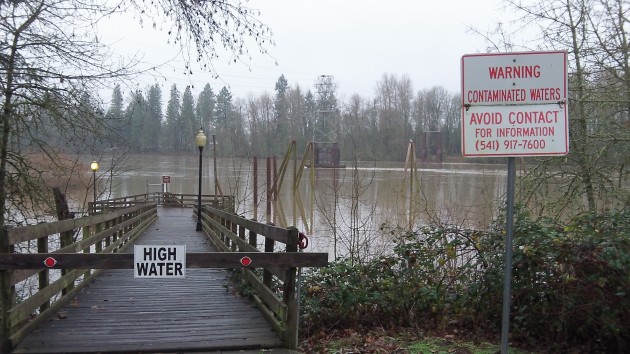 High water in the Willamette River last December with the usual warning about sewage overflow.

The Oregon Department of Environmental Quality has released the results of a seven-year study of “toxic chemicals” in the state’s waterways. Too bad the report is not as useful as one would wish.

The report came out on April 13. It said that “toxic chemicals ranging from pesticides to metals are present in all waters of the state, with some monitoring sites showing levels above state criteria or benchmarks for human health and aquatic life.” That sounds alarming. The details are less so.

The DEQ said it checked for more than 500 chemicals. It found only 128. And in its news release it said, “Most chemicals were at very low concentrations and within applicable criteria or benchmarks for environmental and human health.”

A chart in the report says the largest number of chemicals, 46, was found in the streams of the Willamette River Basin, which is no surprise considering that the valley contains about two-thirds of Oregon’s population. Pesticides in current use made up the largest share of the substances found in the Willamette, also no surprise considering the huge amount of farm land in the valley, along with all those suburban lawns whose owners try to keep them more or less free of weeds.

Also in the Willamette, Industrial chemicals made up only a tiny fraction of the total. (The chart makes it look like two out of the 46 chemicals found were of industrial origin.) About eight or nine came from consumer products including medications.

(This DEQ report, by the way, is unrelated to the seasonal pollution warnings put up when torrential rain overwhelms sewage systems up and down the river. Except for those wintertime events, the Willamette is reasonably clean and safe for swimming and boating, and it serves as a domestic water source for towns including Corvallis, Adair and Wilsonville.)

The DEQ will use this chemical assessment, which began in 2008, as a base line for further studies. The agency says one goal of the monitoring is to “present and make available information gathered for public benefit.” But the public can’t draw any conclusions from the report so far.

What if anything can or should we do, for example, to prevent traces if acetaminophen and codeine from reaching our rivers? If you take the pills — and if you have a toothache you don’t have much choice — how do you prevent the residue from coming out and going down the drain? You might be able to do with less or no household cleaners containing certain solvents, but the contents of medication are out of your control.

So here’s my advice to the DEQ: In the next report on the results of this monitoring, add some practical tips for us to follow, or explain that the concentrations found in the river are so low that they’re nothing to worry about — unless of course you are a fish. (hh)