To the Legislature: Restrain yourself 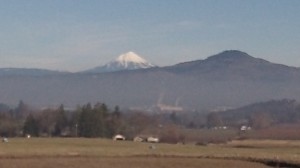 An Oregon scene: Mt. McLoughlin towers over the Rogue Valley.

Here’s a word of advice for Oregon’s 2013 Legislative Asssembly, which has officially begun but won’t start work in earnest until February: Don’t create any more crimes. Don’t pass any more laws that add to the criminal code. And for every other law you enact, try to find one you can repeal.

Oregon is drowning in laws. Take a look at the Oregon Revised Statutes, online or as a set of bound volumes if you can find one. As a set of books, the state laws extend three or four feet across. Most of those laws are obscure and don’t come into play often, or at all.

Would you believe, for example, that there’s a law telling people where and how to walk on the street? I would not have known about that, except there’s a current bill proposing to amend this particular law for people who walk on narrow residential streets. A state that needs to closely regulate walking in public is a state that regulates too much.

Among the new laws being proposed this year is one that makes it a crime to traffic in illegal aliens. You would think that this subject is amply covered by state or federal laws we already have. How else are federal authorities proceeding against the smugglers they catch bringing people across the U.S. border with Mexico?

Think about life in Oregon now. Are we suffering from a shortage of laws? Are there instances of blatant misconduct that are not already against one or another law? We sometimes say, “There ought to be a law.” Well, usually there is, and we could use a breather in the otherwise endless drive to find yet another action for which citizens can be punished by the state. (hh)

From Warren Beeson: Agreed, Hasso; there oughta be a law banning any more new laws