Time to adjust the speed limit 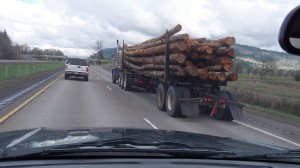 On Interstate 5 south of Albany. (Taking a snapshot is not yet as unlawful as using a cell phone while driving, is it?)

Several years ago the legislature authorized ODOT to raise the speed limit on interstate highways to 70 miles an hour if the agency determined the higher speed would be safe enough. Perhaps unsurprisingly, ODOT found that no, 70 mph would not be safe anywhere on I-5, even on the 30 miles or so that run straight as a ruler between Albany and Eugene.

Amazingly, 70 mph is a perfectly safe speed limit on I-5 all through California. Is it just that California motorists are better drivers than Oregonians? Probably not. In any case, it might be time to remind the Oregon Transportation Commission of its authority to raise the speed limit on the freeway just a bit.

Actually, most of the time, freeway traffic moves along at about 70 anyway, even with Oregon’s lower limit, and the State Police don’t seem to mind. So, another kind of change in the speed regulations might be even more helpful. That would be to equalize the limit for cars and trucks.

Trucks now are supposed to go 55, and when they do, they cause occasional backups, especially when one sticks to the limit and causes other trucks to pass it at 60.

If all vehicles could legally travel at roughly the same speed, traffic would flow more smoothly. Also, the potential for accidents would be lower because there would be less changing of lanes. And above all, the capacity of the freeway, especially the two-lane stretch from Salem to Albany and Eugene, would be greatly enhanced. (hh)

From LaMont Matthews: Good ideas. Actually a lot of California is 75 mph.
The one piece I disagree with is increasing truck limits to the same as cars. That is the case in Arizona and I have found it makes it more difficult to drive strategically and plan the passes. Plus it can be scary to have an 18-wheeler bearing down on you at 75.