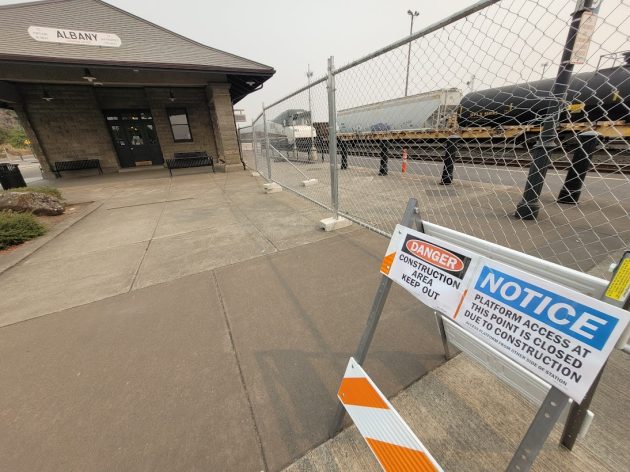 Behind a construction fence, an Amtrak Cascades train pulls into Albany Station at 1:07 p.m. Saturday.

The temporary fencing at Albany Station caught my eye on Saturday. It was not the only noticeable thing there, I found when I stopped to take a closer look.

The first was, of course, the fence and the signs. At long last, the train station is going to get a proper raised platform. This has been on the to-do list since the historic station was rebuilt in 2005.

Bob Melbo of ODOT told me about this last month. He said an Amtrak contractor would start work on Aug. 29 on the southerly 650 feet of the station platform, bringing it into compliance with standards under the Americans with Disabilities Act.

The platform will probably be built in stages to give people room to get on and off the trains. It is expected to be completed by the end of the year.

I was hoping to get more details from an online building permit application, but either Amtrak didn’t file one or the city building division didn’t post it.

The finished platform is supposed to be no higher than 8 inches above the top of the mainline rail. Melbo said it will have “tactile strips along the edge, just like at Salem.”

When it’s done, Amtrak staffers may no longer have to put out those little yellow stools to help passengers board. 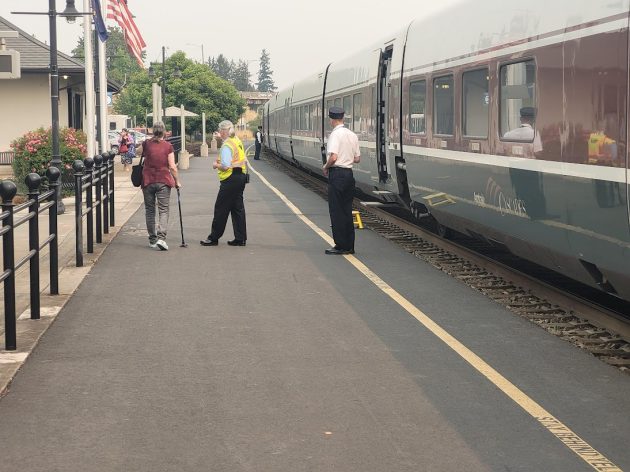 On the platform during the stop of the Cascades train Saturday.

So what else was noteworthy at Albany Station? The flags: 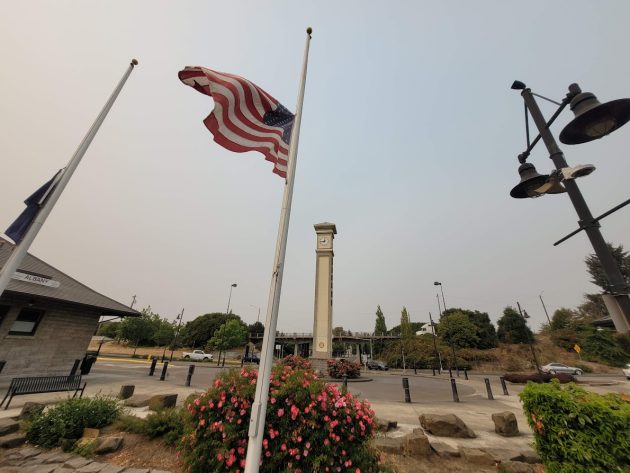 The flags were at half staff in honor of the memory of Britain’s Queen Elizabeth II.

Governor Kate Brown directed that flags be lowered to half staff until Queen Elizabeth’s funeral in London on Sept. 19. On the federal level, President Biden did the same.

And finally — again, and alas — the clocks in the Albany Station tower.

The flag photo was taken at 1:12 p.m., which is not what it said on the clock’s south face. 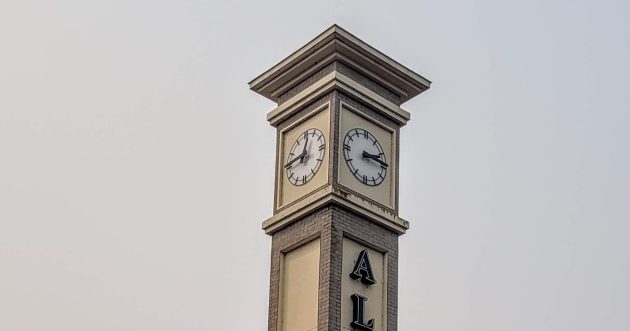 The clocks have been malfunctioning from time to time, despite repeated repairs. Maybe it’s time to give up and replace them with digital ones.

Or the city could follow the suggestion of Lindell Johnson, the reader who again alerted me to the problem. She suggested the clocks be taken out and nice-looking “city medallions” be put in their place. (hh)


6 responses to “Three things to notice at Albany Station”