Those holes in the road: Being fixed

Written May 30th, 2019 by Hasso Hering
Comments: one response. 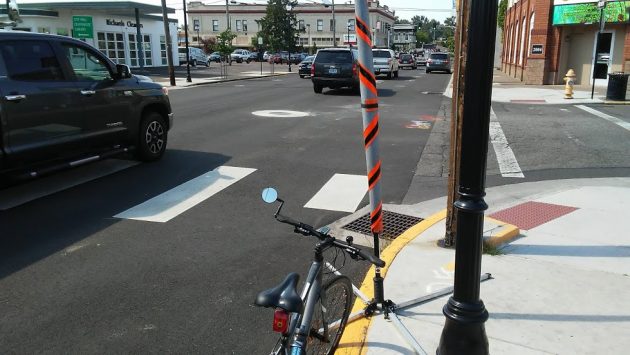 On Lyon at Fourth, one of the repaired manholes on Thursday afternoon. (Traffic made it risky to get a closer shot.)

No more  sudden jolts when driving on Lyon and Ellsworth Streets in downtown Albany. A contractor for the city is finishing what was left undone when ODOT repaved the downtown couplet of Highway 20 last year.

After the highway department put a new surface on the heavily traveled streets of the couplet, several manhole and valve covers ended up an inch or more below the new pavement.

Somehow, making the pavement level with the steel covers, or vice versa, was not part of the state contract. When that project was done, motorists appreciated the new asphalt, but some complained about bumping into the holes.

So the city stepped in. City Engineer Staci Belcastro reported Thursday afternoon: “Emery and Sons Construction Group is completing the work to adjust the manholes and valves on Lyon and Ellsworth.  There are 6 water valves and 9 manholes that are being adjusted.

“The total cost for this work is approximately $58,800 and the project’s manager shared with me that the work should be completed tonight.  Work will take place between 7 p.m. and 6 a.m. tonight and will require intermittent lane closures on Lyon and Ellsworth.”

So, starting Friday morning, unless there are snags, no more slaloming around the manhole covers in order to avoid those bumps. (hh)

One response to “Those holes in the road: Being fixed”