This ‘village’ still lacks a store 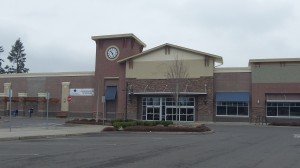 This empty supermarket is waiting for a tenant.

So much for land use planning and zoning. It doesn’t do the public much good if the economy — meaning the real world — doesn’t play along. In North Albany, zoning called for the creation of a “village center.”
And sure enough, an enterprising company built a nicely laid out and attractive shopping center nearly 10 years ago and even called it “North Albany Village.” But Ray’s, the supermarket that anchored the center, turned out to be not a commercial success, and it closed last December.

Whatever decisions residents had made about living in the vicinity because of that “village” were thrown for a loop, at least for now. These people used to have a short drive to the store, and a few could even reach it on foot. Now, if they want groceries, they cross the Willamette and drive across town. If they can’t combine this with other errands or going to work, it’s an extra trip. Talk about burning more gas.

So far there’s no prospect of replacing the missing supermarket. I asked Pete Snook, a principal in the Portland-based Deacon Development Group, if he was close to signing somebody up. He told me he was getting calls from brokers, but “so far, no one has actually talked to me about something concrete … . We have given the package out to several grocers, and one or two said they would look at it, but no one has responded yet. I still expect it to be months and not weeks to find someone.” That was on Feb. 20, three days ago.

There are an estimated 8,000 people living in North Albany, within the city limits of Albany and the two adjoining fire districts. You’d think that would be enough of a potential customer base. (hh)


8 responses to “This ‘village’ still lacks a store”