This rosy glow grabs my attention 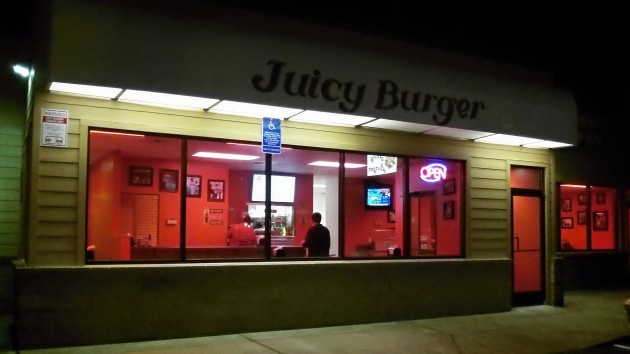 What you see when you’re passing the corner of Elm and queen in Albany.

It was last Aug. 21 when I wrote about this restaurant, which had been vacant and closed for so long that a reader had asked me what was going on. The owner, Ed Wright, told me he hoped to open it soon. Then, on Monday, back in town after a week away, I’m driving around in search of a meal when up out of the night pops this vision of an old-time diner.

Turns out that the Juicy Burger actually opened Dec. 2, but without fanfare, or with so little fanfare that it went over my head. On Jan. 11 there was a story about the newly opened place in the Democrat-Herald, but as fate would have it I was out of town then too and didn’t see it.

So here I am on Monday night, driving along and thinking of tacos or something after sitting through a two-hour city council work session, having managed to stay awake through one Power Point slide after another. I’m thinking of tacos or something and heading for Pacific when, at the corner of Queen and Elm, I see this rosy glow where I’m accustomed to seeing nothing at all. I stop and go inside. Sue enough, the décor tends toward red, and there is a counter with round stools, just like in the diners of old. There’s a dining room with tables too. But for me counter it is. 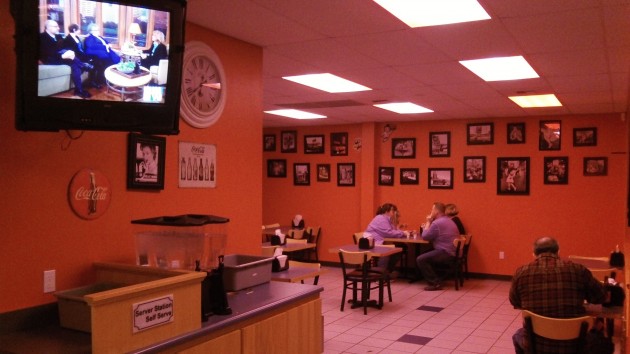 The interior décor has a decidedly reddish tint.

The menu is brief and to the point. Burger and fries. That’s pretty much it. Oh, there’s soft ice cream too, rounding out all the essential nutrients.

The basic burger is $3.50. If you want the luxe version with lettuce and stuff, it’s more. My basic burger was pretty good, I must say, even without the extras. And yes, juicy too.

I’m reporting on this mostly to close the loop that I opened with the entry last August: The long-awaited burger joint is open. The employee behind the counter tells me they’re open from 11:30 to 7:30 Monday through Saturday. So you can try it out yourself.

As for the council work session, the most interesting thing I learned has nothing to do with burgers. It is Albany residents are not allowed to keep pigs, or swine as the city code has it. But to accommodate a young brother and sister who want to raise two piglets at their parents’ place off Highway 20  in North Albany as a 4-H project, the council is prepared amend the code. There will be restrictions  — only two pigs, and only under certain circumstances — lest there be a stink. Want to know more about this, tune in or sit through the council meeting Wednesday night. (hh)


8 responses to “This rosy glow grabs my attention”