This is what Albany wants to discourage 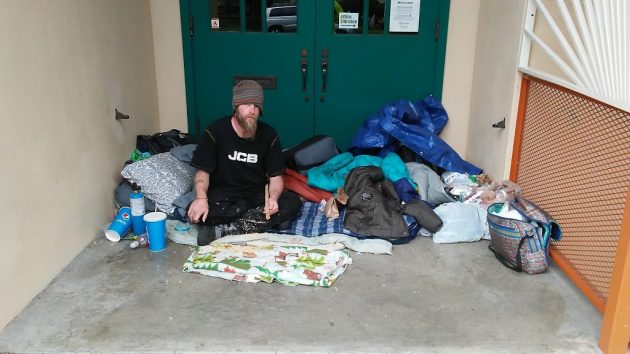 Asked if I could take his photo, the man camped in the east doorway of the First Christian Church Saturday said yes.

Scenes like this — people camping downtown on public and private property — are what some members of the Albany City Council don’t want to encourage. That’s why they worry about a portable toilet that’s been set up outside the First Christian Church since last fall.

I came across the scene as I went past the Ferry Street side of the church early in the afternoon the Saturday before Easter. The man was sitting in his camp, whittling a stake to make what he said would be a walking stick. He told me his name was Jason and he was 37 years old.

Had someone hassled him about camping there? He shook his head a little. Did he intend to stay long? He said something about an “agency” trying to find him a place. His stuff was still there in the early evening. The next day it was gone.

The First Christian and nearby United Presbyterian churches had gone together on the expense to set up the outdoor portable toilet, on the west side of First Christian facing Washington Street, because of concerns about the messes left by people spending nights near the building.

A section of the Municipal Code prohibits permanent placement of “privies” not connected to the sewer system, but the code allows the council to approve exceptions for up to a year at a time.

Two weeks ago, the churches appealed to the council and asked the city to develop standards for allowing portable toilets. The council discussed it for a bit before Mayor Sharon Konopa referred the issue to the city staff for a report on the ramifications for the council to consider.

She told me at the time she hoped for the report to be ready this week. But it’s not. There are complications. One of them is that the city has permanent portable toilets in several city parks, and the city code will have to be amended in order to keep them there. Or the council has to act to allow each one from year to year.

The council has talked about what has happened in Seattle and other cities overwhelmed with people living on the streets. The city manager has called attention to “Seattle Is Dying,” a documentary produced by KOMO-TV and available on YouTube.

After showing how downtown Seattle has been affected by lawless street life brought on by drug use and mental illness, the program also reports how Providence, R.I., seemingly solved the problem: By confining violators and giving them medications to overcome their addictions.

Albany doesn’t have anything close to the problems the KOMO video shows. Not yet anyway. And the mayor doesn’t want to do anything, like allowing a portable toilet, that might make it easier for people to exist on the street instead of going to shelters where they could possibly get some help. (hh)


27 responses to “This is what Albany wants to discourage”