The Waverly Duck and bigger stories 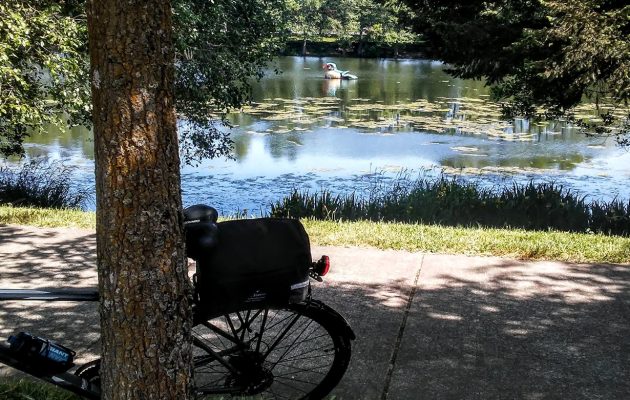 The Waverly Duck, on the far side of rafts of algae, as seen from Salem Avenue on Saturday afternoon.

The Waverly Duck is back on the Albany pond for which it is named. That was one item of news the city council got in City Manager Peter Troedsson’s weekly summary Friday. The other items were a bigger deal, and one posed a puzzle.

The fiberglass and polyurethane duck had been in wintertime storage. After being donated to the city, it was repaired and returned to the lake in 2017. Every fall since then the parks department has taken it out to store it for the winter.

Among the other items on Troedsson’s rundown of significant developments affecting Albany:

— Albany and other cities have settled their lawsuit against the state Department of Environmental Quality over the DEQ’s new requirements for handling storm water. The city said in 2019 the requirements were impossible to enforce but would cost lots of money anyway. The council got updates about settlement negotiations in executive sessions, out of the public eye. Now the permit requirements have been modified to the point where the city believes it can carry them out, the public comment period is over, and the city will apply for the permit.

— The city’s IT staff is taking steps to prevent cyberattacks by criminals seeking ransom. Troedsson cited the attack on the Colonial Pipeline Co. back east and said similar breaches were committed against the police department in Washington, D.C., and the city of Keizer in Oregon. New tools for users of the city’s information system were mentioned, as were steps to “harden” system defenses. Maybe that’s why I could not check the public website for a building permit last week without registering. And when I did register, the system said I was not authorized.

— Albany is getting $8.4 million from Uncle Sam under the “American Rescue Plan.” The Treasury is putting out rules on how or for what the money is supposed to be spent. There is a list of all American cities over 50,000 getting some of that cash. Here’s the puzzle: While Albany gets $8.4 million, Corvallis stands to receive more than $13 million. Corvallis is 1.09 times the size of Albany. So why is it being handed 1.5 times the amount of federal cash?

There may be an answer to that question. If so, somebody may supply it in the comments. If not, I’ll ty to find out next week. (hh)


10 responses to “The Waverly Duck and bigger stories”