The trouble with narrow streets 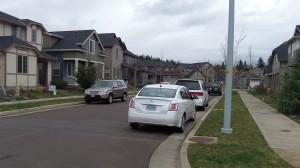 A street in Benton Woods.

Narrow residential streets may be quaint, but in Albany they have caused a problem for school bus drivers. The problem is that in some newer subdivisions, school buses cannot get around corners because the streets are choked with parked vehicles and the space that is left is too narrow for buses to get through.

The city council learned about this in a recent meeting with the school board. Bridle Springs, North Pointe and Benton Woods were mentioned as places where narrow streets have become an issue. It was many years ago when, in the course of redoing its development code, the city decided to allow streets 28 feet wide, rather than the standard 30 feet. The idea was that narrower streets would save money and would also enhance safety by encouraging traffic to be slower. Turns out the planners didn’t reckon with people who park their cars not exactly right up against the curb. The contrast between the older part of town and these new subdivisions is striking. Wide and straight streets in sections laid out up to 100 years ago, and winding, narrow streets in some of the newer ones.

Now that the difficulties with school buses have been brought up, Mayor Sharon Konopa suggested the city should take another look at the development code. Sounds like a good idea. Narrow residential streets may turn out to be a passing fad. (hh)

From  Mel: The way to solve the narrow sreet issue is to only allow parking on one side of the street. The city will hear from the fire dept. when they have issues getting to a fire. This happened in Salem years ago and now the street only allows parking on one side. It solved the problem and should do the same for Albany.

From Shane Northern, via  Facebook: Have children wait at the street corners for the bus. Then the bus doesn’t have to go down the street. Problem solved.
From Ted Salmons, via Facebook:  Oh no. Say it ain’t so. Students might actually have to walk a block or more to a school bus stop.  Whatever will they do.  The kids probably won’t care but clingy parents will have fits.
Posted in: Uncategorized