The proof is in a smooth ride

Now that the lines have been painted on the newly widened and repaved segment of Riverside Drive outside of Albany, I rode my bike along a part of the new road on a very windy Wednesday afternoon. And I found this road clearly very much improved.

Thanks to Linn County for seeing this project through up to this point. It’s been in the works for a long time.

I remember talking to County Commissioner Roger Nyquist about this six or seven years ago, when I was still working for the local paper. He had persuaded ODOT to plan a separate bikeway along Highway 34 as a solution to a particular problem with a then-pending highway project near the Corvallis bypass. And a county project to widen Riverside would connect with that new bikeway and provide a safer route between Albany and Corvallis.

So now that about 2.4 miles of the Riverside project is done, what about the rest, all the way to Highway 34?

“In our agreement with ODOT,” Nyquist reminded me by email, “we committed to do the full length of Riverside Drive. I think we may look for a grant opportunity to finish it off, and if that is not successful we will just build it into the schedule.”

He thinks it may take two or three years to complete the rest of the road. “It will be a nice downtown to downtown connection once we are finished.”

Under its $1.9 million county contract to widen and repave the road, and build a new turn to eliminate a sharp curve, Knife River was to have finished by June 22. Not only did they beat the deadline by a month, but for motorists and cyclists both, they have provided a much smoother ride. (hh) 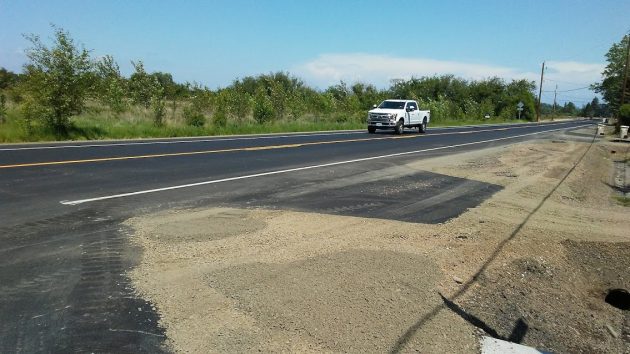 Riverside Drive, looking east from the corner of Ebenger Street.


5 responses to “The proof is in a smooth ride”