The last days to see this historic site 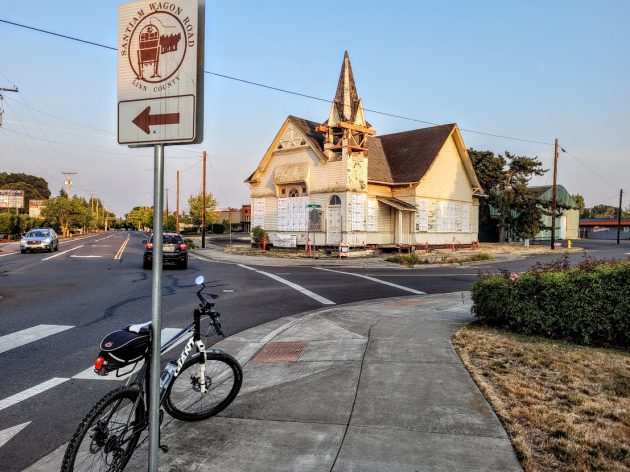 The former Cumberland Church on Tuesday evening. It will be moved up the old wagon road on the left..

These are the last days of  Albany’s former Cumberland Presbyterian Church at its historic site. So if you want to refresh your memories of how it fit into the neighborhood, better take a look before it’s too late.

The former church, built in 1892 and expanded in the 1920s, is going to be moved from its site at Main Street and Santiam Road to a vacant lot near Santiam and Pine Street, about a quarter-mile away.

The move originally was scheduled for Sept. 2, but then the Union Pacific Railroad said that date wouldn’t work. (The building will have to cross the UP mainline and a Portland& Western track to reach its new site.)

A new date for the move is two weeks later, on Sept. 16. Thursdays seem to be the preferred weekdays. Don’t ask me why. It may have something to do with the schedule or frequency of trains.

The tower is supposed to be taken off before the move, to be restored on the building later.

At the risk of repeating what everybody knows, a private nonprofit, the Cumberland Community Events Center, has arranged for the move and plans to restore the old structure at the new site, adjacent to the Albany Skatepark and the Habitat for Humanity Restore. The group is buying the new site from the city and is getting the city-owned church building for a dollar.

The building shows many signs of being made ready for the move, as you can see in this blown-up shot: 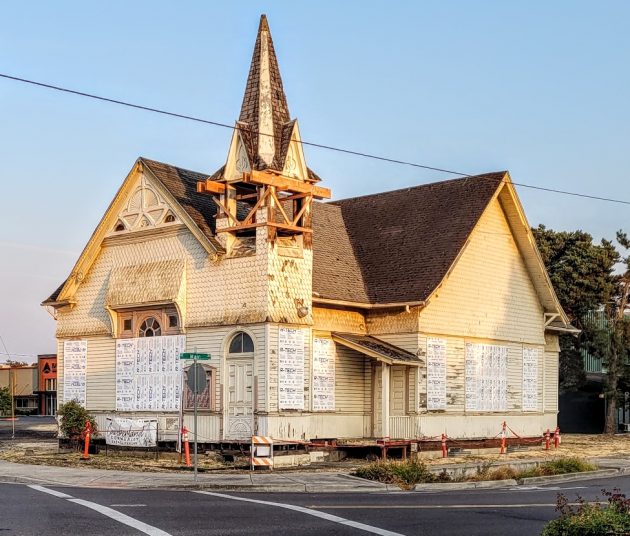 The steeple looks ready to be taken off. Windows have been removed or covered up.

What happens to the lot the church has occupied for 129 years? The city bought it in 2000 for $150,000 for a road project. But the project later was redesigned so this property was not needed. The council has not considered, let alone decided, whether to sell the lot, or to whom. (hh)


2 responses to “The last days to see this historic site”