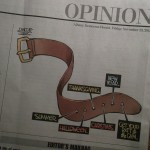 The gym for exercise? To keep off pounds? What could be more boring than that? And time consuming. And expensive in both time and gas, depending on how far from the gym you live.

I got to thinking about this after seeing an editorial cartoon in the Democrat-Herald, where I used to work. It showed a belt. The hole that would make the belt the tightest was labeled summer. Then, the other holes were Halloween, Thanksgiving, Christmas, New Year and the last one, beyond which there were no more options, said “Get your butt to the gym.”

The cartoonist didn’t think he could say “butt” on the editorial page, so it was spelled with an asterisk instead of a u. But the message was there. And as far as I’m concerned, the message, while not wrong, also is not necessarily right. Walking for an hour on a machine, staring at the wall or a TV, or using one of the other machines they have at these places, doesn’t sound like a lot of fun.

So instead, I figure we could try to do a little moving around every day, whenever there’s a way to do so, and that would have the same result. Like what, for example? Like in the fall, leave the leaf blower in the garage and use a rake and a broom instead. You can’t believe the workout that gives your arms and your core. Or you could walk more places if you have the time. I know that’s tough for a lot of people. But walking up a few hills burns quite a few calories that holiday meals put on.

And then, of course, there’s riding a bike. It’s while riding around town the other day, between rain storms, that I noticed leaf blowers in action, lots of them, everywhere I went. It seemed to me that if leaf blowers had not been invented, homeowners with yards and driveways to keep up would have to worry about going to the gym much less. (hh)