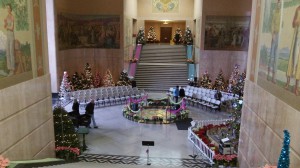 The Capitol last December. A Senate tax proposal would mean Christmas all year for local governments if the legislature puts it on the ballot and voters approve it.

Don’t look now, but they want to increase your property taxes. By “they,” I mean the majority of those senators who were on the state Senate Interim Committee on Finance and Revenue. They have introduced a constitutional amendment that would remove the property tax limits where local option tax levies are concerned.

This has been a priority of local government officials around the state. They complain that as voters approve more levies, the constitutional limits on property taxes cause each one to collect less revenue. So, one of the Senate tax committee’s proposals is to do away with those limits on local option levies.

Those are the levies which, once approved by voters, allow local governments to impose taxes beyond their fixed and permanent tax rates. But the total tax limit of $15 per $1,000 of real market value, set by Measure 5 in 1990, still applies. This is protection for homeowners. It keeps the tax rates on individual properties from going out of sight. The Senate committee now wants to do away with that protection. It also wants local option levies to be good for 10 years, instead of five years, which is the limit now. And its proposal would allow local governments to seek voter renewal of option levies at any election, not just the primary and general, starting two years before any levy expires.

Combined, these proposed changes — part of Senate Joint Resolution 10 — would surely lead to a proliferation of special levies being piled on top of each other, instead of being partially replaced by each other as now. The likely result would be more local government revenue. That’s the goal. And that would mean a bigger tax bill for you. Republicans in the legislature, who fought tax increases in the past, are in no position to stop this plan now. So you will most likely see it on the ballot in 2014. If you want to pay more, get ready to vote yes. (hh)

From Ray Kopczynski: “Those are the levies which, once approved by voters…its proposal would allow local governments to seek voter renewal…Combined, these proposed changes…would surely lead to a proliferation of special levies being piled on top of each other…”

Yes.  However it would be by the VOTER’s choice. (Note that it does not say “electors.”) As it now stands (as a homeowner), I do not even have the option to vote “No” if I so choose.  As for “piled on top of each other…” I would suggest that intelligent voters can read what their added costs will be if they vote for them and they do pass…  I would also suggest it will be an uphill battle to get multiples approved at any given time.