The end of old empty houses? 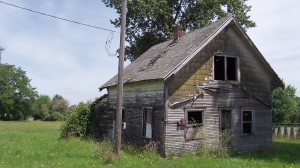 HB 2746 may allow owners of houses like this one in north Linn County to replace them.

The other day I wrote about an old house in the country, a farm house between Jefferson and Scio that was still standing but had not been lived in for many years. On  Saturday I came across another one, also abandoned to the wind, sun and rain.

This one was on Hoefer Road north of Millersburg. I was on my bike, as usual. That’s a pretty good way of exploring the countryside, even if — and especially if — you’ve lived in an area for a long time.

And this time I remembered something about old houses in farm country. Under Oregon’s land use laws, normally you can’t build a new house in the exclusive farm zone. But you can replace existing houses under certain fairly stiff conditions. Now the legislature has passed a bill, HB 2746, that’s supposed to make it a little easier to do this.

Several farmers told legislators they owned uninhabitable old houses, in one case more than a century old. They said they could not replace them under the existing law. But they expected the bill would allow them to do so.

I read the committee staff’s description of the bill, and I don’t see how it’s all that helpful. But if it is, maybe it will cause a number of owners to obtain permits to tear down abandoned farm houses and replace them with modern dwellings. If it helps them in their operations, fine, of course. But I’d miss discovering some of those old ruins on my rides. (hh)