The council and pot: Groundhog Day 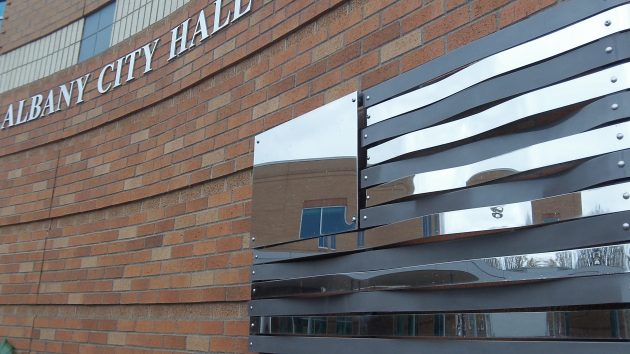 The Albany City Council went round and round for a couple of hours Monday on the issue of regulating recreational marijuana sites. In the end the ordinance under discussion failed to advance, but the council will try again next month.

City voters have overturned the council’s ban on recreational pot commerce. But the ordinance in question would ban recreational marijuana operations including retail within 300 feet or residential and several other zoning districts. The city staff says the ordinance might not stand up in court because it may be found overly restrictive.

The ordinance failed on a 3-2 vote. Any council action takes four votes. Councilor Dick Olsen, an opponent, was absent, which prevented a 3-3 deadlock that would have resulted in Mayor Sharon Konopa breaking tie and passing the measure. Councilors Ray Kopczynski and Bill Coburn voted no. Rich Kellum, Bessie Johnson and Floyd Collins voted yes.

Collins anticipated that the yes votes would come up short. He moved to adopt the ordinance anyway, with the understanding that when it failed it would come up again, in amended form, at the council’s scheduled meetings Dec. 5 and 7. Among the amendments would be one grandfathering any existing medical marijuana dispensaries so they would not be affected by the proposed stricter definition of the 300-foot limit.

Konopa said again she wants to keep marijuana operations out of neighborhoods, including commercially zoned areas near where people live. Coburn wondered why the city needed an ordinance like this, considering all the state regulations on recreational pot. He had visited several retail shops in other cities and found them “professional and clean.”

Ross Day, a Portland lawyer representing Oregon Cannabis Co., a dispensary on Santiam Highway S.E., challenged the proposed ordinance on several points, among them that the council had failed to handle it like the land use matter he says it is. If it passes, Day pledged to appeal to the Land Use Board of Appeals.

With the proposed ordinance dead for now, existing city law says recreational pot retailers can go wherever medical pot dispensaries are allowed. Existing law has a looser definition of how 300 feet are measured. It also has an exception from the 300-foot exclusion zone for outfits in industrial zones.

The council has been debating marijuana since 2014. December will be Collins’ last month on the council, as he didn’t seek re-election. He says he wants to see issue settled before he leaves. Fat chance, but good luck! (hh)


15 responses to “The council and pot: Groundhog Day”