The Big Dig: One block’s done 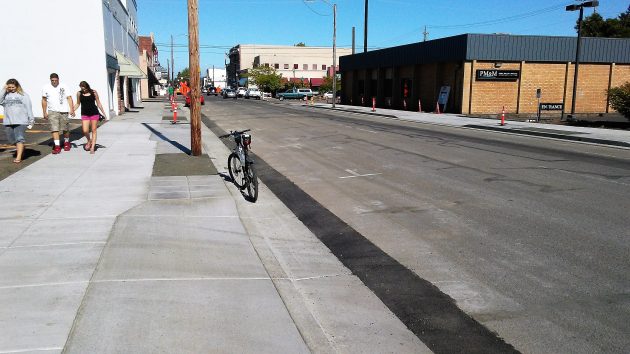 Looking east on Second Avenue between Washington and Ferry on Wednesday afternoon.

One block down, sort of, and about two dozen more to go. That’s the word from Albany’s $8 million project to upgrade the look and infrastructure of several of its downtown streets.

The contractor, Emery & Sons, has finished rebuilding the sidewalks on one block of Second Avenue, between Washington an Ferry streets. It looks kind of bare, but it won’t look that way for long.

“We expect the trees and light poles to go in sometime this fall, which will finish things off nicely,” said Lindsey Austin, the Albany Public Works engineering technician managing the “streetscape” project and keeping the public and affected property owners posted.

Downtown business owners have worried that the construction would be making this summer tougher for them than usual. The jungle of road-work signs and heavy equipment on the streets may keep customers away. But actually, it’s not hard to reach downtown destinations because actual construction is taking place at only one or two locations at a time, and the contactor’s crews are making sure public access is maintained.

Austin reports that the city is still working with ODOT to obtain a permit for the work planned to take place within the state right-of-way on Lyon and Ellsworth streets, the downtown couplet of Highway 20.

“Due to permitting delays the project completion will be later than anticipated, but it is difficult to estimate a completion date at this time,” she told me by email. “ODOT provided a draft permit this week, and we anticipate approval to begin work in the state highway some time during the week of Aug. 28.”

From the city’s perspective, progress on the overall project has been fairly smooth so far. Austin credited businesses and the public with being “very understanding and cooperative with staff and the contractor.”

The project, funded by CARA, the downtown urban renewal district, covers 27 blocks, but most of the work is on segments of Second and Third avenues and Broadalbin, Ellsworth and Lyon streets. The streets are to be replaced after the sidewalks are done. According to the original schedule, the city streets were to be finished by Dec. 1, but the highways probably won’t be resurfaced till next year. (hh)

4 responses to “The Big Dig: One block’s done”