The annual battle of the fallen leaves 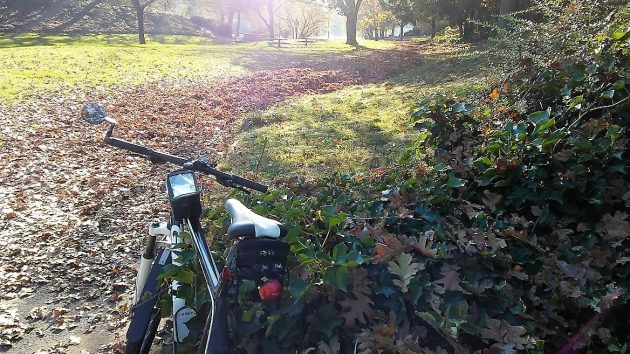 A long pile of leaves covers this footpath in Waverly Park on Sunday.

Autumn leaves are piling up everywhere in Albany this mild and dry — so far — November. But the end is in sight as more and more of our trees are beginning to look pretty bare.

As usual, Republic Services scheduled three 12-day periods to pick up leaves on city streets. The first ended Nov. 16, and the second starts Monday (Nov. 19) and goes through the 30th. Then there’s a final pickup period Dec. 10-21. (The dates are shown on the city government’s website, which is where I got them.)

To take advantage of this service, residents are supposed to deposit leaves in long narrow piles two feet from the curb. But they’re not to block bikes lanes, storm drains or driveways. Bike lanes get blocked anyway, and if you’re going to put leaves in the street away from the curb, the bike lane is the only place where you can put them.

Though it’s convenient to have this public leaf disposal service, it’s not clear when or why it became the city’s responsibility to dispose of leaves from people’s yards. How about residents just dumping them in carts Republic provides for yard debris? If the carts don’t hold them all, fill the carts every other week until the pile is gone.

Just be glad you don’t have to deal with the immense amount foliage that falls from the thousands of trees in the city’s parks. (hh)


6 responses to “The annual battle of the fallen leaves”