That’s supposed to be a public meeting? 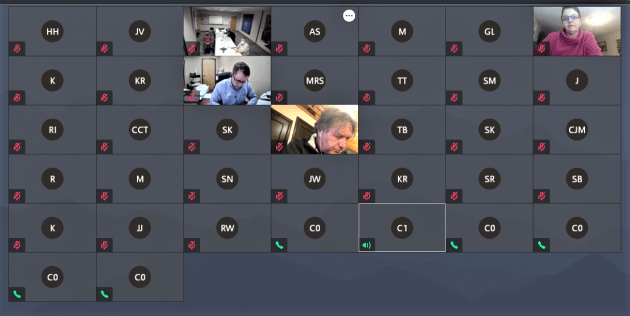 This is a screenshot from the virtual meeting of the Albany Planning Commission on February 1. It may give you an idea how hard it was to follow this ostensibly “public” meeting of a local governing body during this Terrible Time of Covid.

Seven or eight members of the planning commission were taking part in this meeting, the main part of which was an important public hearing concerning an apartment development (“The Banks”) on the Willamette River. But the public could see only three of them — and recognize them only if they happened to know them by sight.

The screen at that time of the meeting showed only the applicant’s representative, two members of the commission in their homes or offices, and the chairman in a group shot from City Hall.

Like members of the public tuning in, the other commissioners were identified by the GoToMeeting app only by their initials. One or more of them were represented as a generic and anonymous “CO,” whatever that stands for.

Citizens watching this meeting could not tell whether the invisible commission members were paying attention. Were they even there, or had they perhaps wandered off to the kitchen to grab a bite?

Virtual or remote meetings online are necessary because of the governor’s edict banning ordinary public sessions. But there ought to be ground rules on how they are conducted so they at least resemble the public meetings they are supposed to replace.

The ground rules should include that public officials be identified on the screen, and that they turn their cameras on. (hh)

It was only toward the end of the meeting that three more commissioners activated their cameras.

6 responses to “That’s supposed to be a public meeting?”