Take a look at this handy little RR crossing 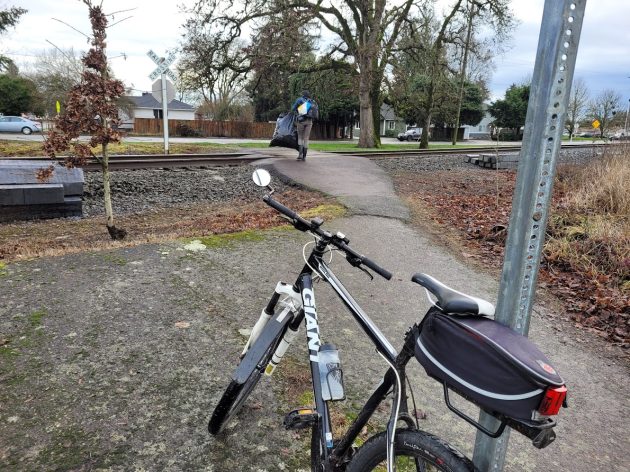 Toting a bag, a person walks across the Union Pacific mainline at the Burkhart Street crossing just after a freight came through on Friday afternoon.

There’s a nice little path people can use to walk or bike across the Union Pacific mainline track at Burkhart Street. Nothing much has happened there lately, as far as I know, but I thought I would show it to you anyway.

On Friday afternoon I got there on the bike from the north, on Burkhart, just as a freight train got there too. It took me a few seconds to unlimber my phone, but when I did this was the scene:

This Burkhart Street crossing is conveniently located. The only other nearby places to cross the tracks are on Geary Street to the west and on Davidson Street on the other side.
People without cars who live in the Willamette neighborhood can use this pathway to connect with Salem Avenue and places to the south, including the Albany Bottle Drop on Santiam Highway, less than half a mile away.
On bike rides around town, I often use this path as a shortcut to get off Salem Avenue and head north toward the riverfront. Sometimes I take it in the other direction.
The crossing path is surfaced with asphalt, which is nice for walkers and cyclists. A few years ago, the railroad was repaving the place and the crossing was temporarily torn up. I wasn’t paying attention, had to make a panic stop, couldn’t get my feet out of the clips fast enough and landed on the ground.
Something like this also happened to me a few months ago at an intersection downtown when I needed to make a sudden stop. Lesson learned: I replaced the clipless pedals with flat pedals of the kind the bike came with when it was new. No more need to unclip.
(Why do we call pedals “clipless” even though bike riders clip into them to hold their feet firmly in place? Because they are different from the old-style cage-like clips that riders used until the 1970s or so.)
Back to the bike-ped crossing at Burkhart Street: It crosses two tracks, the UP mainline and a line of the Portland & Western.
There are stop signs but no other crossing protection. So users of the path have to be reasonably alert, listen, and look both ways before crossing the tracks. (hh)
Posted in: Bicycling, Commentary
Tags: Burkhart Street crossing, pedestrian crossing, Portland & Western, railroad, Salem Avenue, Union Pacific, Willamette neighborhood