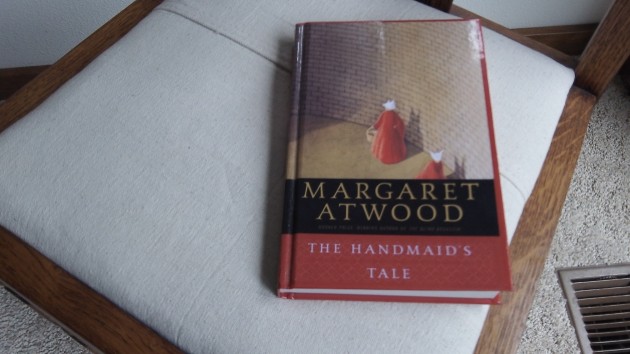 “The Handmaid’s Tale:” Entertaining it’s not.

If you want to increase local interest in a particular book, one sure-fire method is to object to its being used in a high school class. This I realized Tuesday when I tried to find a copy of “The Handmaid’s Tale” by the Canadian writer Margaret Atwood.

A few weeks ago the mother of a West Albany High School student questioned the novel’s being part of the reading assignments in an “advanced-placement” English class. A school district committee reviewed the book and decided it could remain, as reported in the Albany Democrat-Herald. The mother decided she had made her point and declined to appeal, and in a letter that appeared Tuesday, a librarian reaffirmed the strong conviction of her profession to the “freedom to read.” That’s the end of it, I guess, but not for me.

Press accounts of such controversies never explain exactly what prompted the complaint. If the material is salacious enough to cause objections, it’s usually too raw to bandy about in public. So the only way to find out is to read the book. The Albany Public Library has several copies, but when I checked on Tuesday, all of them at both branches were either checked out or on hold. Even the large-print version was out. Very popular suddenly, the “Handmaid” is.

But I was in luck. At the school district office, Jim Haggart helped me get a copy from the scene, so to speak, the English Department at West. I spent the afternoon flying through the 309 pages of text, most of them anyway, and I have to say: It was a chore.

The book came out in 1986, and the Library of Congress cataloging data include the tags “man-woman relationships” and “misogyny.” Well, yes, sort of. It’s the first-person narrative of what happens to “Offred” — get the symbolism? — and other women kept as slaves in a cruel police state supposedly inspired by parts of the Old Testament. Offred is kept in the household of one of the regime’s officials, and her role is to produce a child, which is a problem because like most of the people in that society, her “commander” appears to be infertile. There is sex, obviously, though the narrative makes it sound more like breeding livestock. And there’s violence, including public hangings and a crazed mob of women tearing a male convict apart.

The author paints a grim picture of a mad theocracy treating everybody, but especially women, like dirt. Atwood, now 75, lived in Toronto when the book came out. She sets the story in what used to be the United States, making Canada a safe haven where refugees sometimes end up, and she uses Biblical beliefs gone wrong as her theme. But her dark fiction fits far more neatly what we hear is happening in the Islamic State today.

As a reader, I think book authors have three possible jobs: To inform, to entertain, or to make us think, or all three together. “The Handmaid’s Tale” doesn’t inform us, obviously, and it fails as entertainment. It does make us think, perhaps, about freedom, tyranny, religious fanatics and what the future holds if we’re not careful. But George Orwell already did that, no less terrifyingly, in 1949, when he published “Nineteen Eighty-Four.” And that was a better read. (hh)