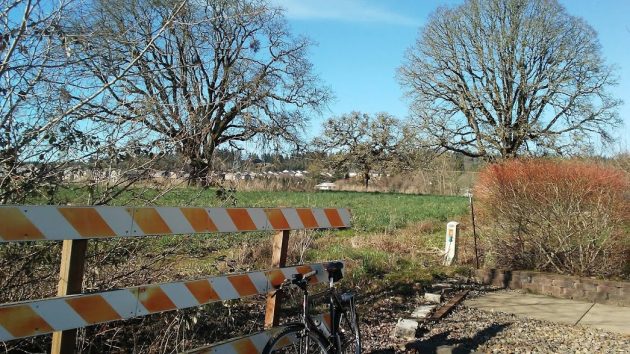 Some of the doomed white oaks in the planned Pheasant Run subdivision as they looked in February.

All of the North Albany residents who spoke were against it, but the city council Wednesday approved the Pheasant Run subdivision anyway. It didn’t have much choice, given that the planning staff had recommended approval on the grounds the development met all applicable criteria in Albany’s development code.

Hayden Homes wants to build 147 houses on part of the 47-acre field north of Dover Street and east of Crocker Lane. About 13 acres would be left natural. While some trees would be cut, several hundred would be planted along the new streets and on the lots.

Eleven nearby residents urged the council to deny the land-use application and uphold the planning commission, which had turned down the request. But after a two-hour hearing, the applicant prevailed on a 5-1 council vote. Councilor Dick Olsen voted “no.”

Much of the testimony — as far as I could hear it, which wasn’t all that far — dealt with eight big white oaks on the property. They are said to be 150-250 years old. The subdivision layout calls for six to be cut down and two to be saved.

The opponents also were concerned about the loss of wildlife habitat on the acreage, and about yet another increase in traffic when this added housing it built.

The Portland lawyer for the applicant told the council that under state law and the city’s development standards, the council was obligated to approve the subdivision. City Attorney Sean Kidd agreed. The implication was that if the council said no, the case would go to the Land Use Board of Appeals and the city would lose.

So that was that. As an observer, I thought it’s too bad that the owner of this big old field in the middle of North Albany did not sell it to a developer willing to build a neighborhood around assets like those old oaks, instead of regarding them as obstacles to be removed. (hh)