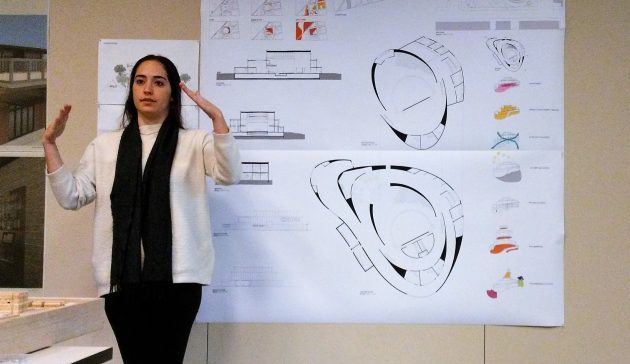 Architecturally speaking, downtown Albany would be a more exciting place if there was a way to carry out any of several redevelopment designs worked up by students at the University of Oregon.

About a dozen UO students — from Oregon, other states and abroad — presented their ideas at City Hall Wednesday afternoon. They developed them during fall term in a design studio class taught by Joseph Moore. They and students and faculty in other classes at the university are spending this school year working on Albany projects as part of a UO program called the “Sustainable Cities Year.”

Moore’s architecture students had an assignment: Come up with designs of how three downtown sites could be redeveloped. The sites are the former St. Francis Hotel, the post office block, and the city parking lot behind the old Penney’s Building.

Allen Suwardi’s concept for the St. Francis would preserve the four-story historic building’s façade but gut the interior and construct a seven-story addition to provide hotel rooms, apartments, other uses and even a terrace that would serve as green space. The students were not supposed to worry about economics, and asked how much his concept would cost to carry out, Suwardi hesitated and then said, “A lot of money.”

A few years ago a Portland development company proposed to remodel the building as workforce housing at a cost then estimated at $10 million.

Other students presented less ambitious ideas for the St. Francis. One said her approach was to keep the original interior structure and build a number of apartments or units for short-term stays by combining adjoining former hotel rooms and turning some bathrooms into kitchens.

Student Karin Ziv’s idea was to build a performing arts center, consisting of sweeping curves outside and in, on the site of the Albany Post Office. Her design had an auditorium for 300-340 people as well as a restaurant and space for other uses, including art galleries. There’s no indication the post office has any plans to leave its leased building and grounds, but if Albany keeps growing the Postal Service may have to change sites eventually.

For the city-owned parking lot between the remodeled Penney’s Building and Water Avenue, students presented several concepts for turning the property into a combination market-restaurant-business center. Steven Liang’s design called for, among many other things, space for a permanent farmer’s market facing Water Avenue.

How about parking, city officials wondered. Some of the student designs featured underground parking. But If anything like these ideas are ever carried out and bring in hundreds more people and vehicles downtown, a parking structure likely is inevitable.

The UO-Albany partnership continues for the rest of the academic year. Students in a variety of disciplines are also tackling tasks such as master planning for city parks and developing ideas for rejuvenating Water Avenue and the riverfront. (hh) 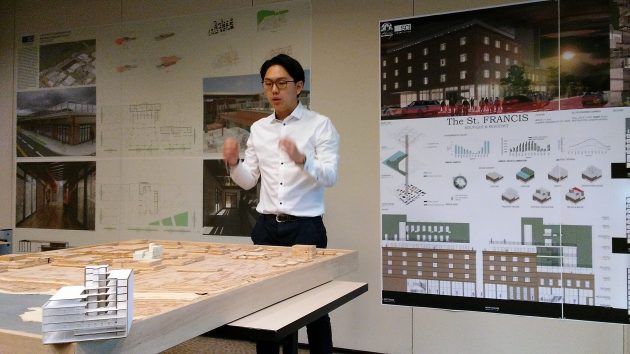 Allen Suwardi’s St. Francis design in drawings, behind him, and two models, one on its site in a plywood mockup of downtown, the other in the left foreground. 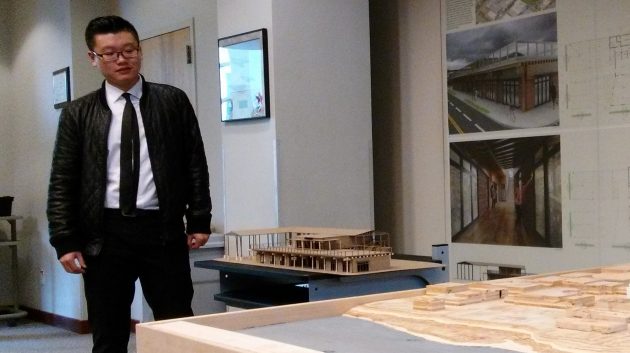 Steven Liang with a model of his idea for a market building facing Water Avenue.