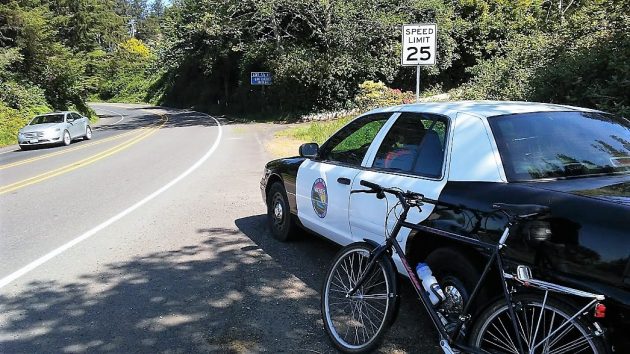 Once you know this is not a police cruiser with a radar gun, you might feel emboldened to lean your bike against it.

Whether this works if speed control is the goal, I’m not sure. Yachats, on the central coast in Lincoln County, seems to think it’s worth a try.

Without a police force of its own, the town has been parking an old Crown Victoria in strategic spots to try to slow traffic on Highway 101 to 25 miles an hour as it enters the business district. My guess is that tourists instinctively hit the brakes the first time they see the black-and-white. And even regulars on the highway might be reminded of the reduction in speed, more than by the sign alone.

As a low-cost attempt, it beats installation of radar speed signs of the type that the Albany City Council wants the staff to install on Second Avenue near where the street crosses the Portland & Western track. Similar radar speed displays on Spring Hill in North Albany cost Benton County several thousands dollars when they were put up about two years ago.

The Albany council gave its staff direction on April 23 to put up the Second Avenue radar speed display sign temporarily to see whether it works to slow traffic down. No word on how the planning for that project is coming, or when it might be carried out.

In the meantime, maybe the Albany cops have an old Crown Vic lying around they could park by the side of the street. (hh) 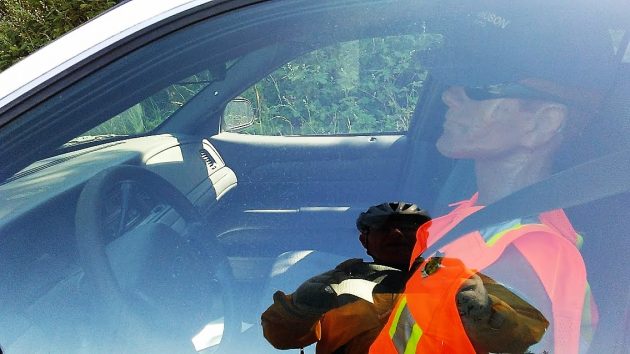 This officer seems kind of passive, even when somebody points a phone camera at him. His lack of arms may have something to do with it.