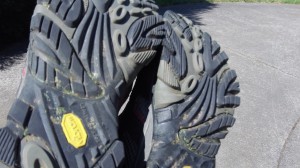 According to legend, Bill Bowerman used a waffle iron to make a prototype of what later became a generation of Nikes. Ever since, shoe designers seem to have tried to outdo each other in the variety of patterns they could mold on their soles.

A little ribbing I could understand, for traction on slippery ground. But why the deep and exaggerated patterns? Maybe they help in cushioning the feet, and if that’s the plan I’m all in favor. But haven’t we gone a little too far? Even some dress shoes now have soles with raised patterns.

And here’s the reason I’m bringing this up: If you happen to wear your hiking shoes while doing yard work — nothing big, you know, just cutting down weeds and raking and maybe a little line trimming too — you can spend the next day or two trying to get the muck out of the grooves of your soles. With grass and dirt, that’s not so bad. But have the shoe makers ever heard of dogs and what they do, and if they have, why did they go ahead and put in all those grooves? (hh)

Janine Gould responded on May 9: It is one of the BIG mysteries of life! I agree. Things were much simpler “in the old days” (and cheaper!).

Marianne Vandenberg responded, via Facebook: It’s so if you commit a crime they can identify you more easily with a unique sneaker tread print in the blood or mud or snow — sheesh, don’t you watch CSI?