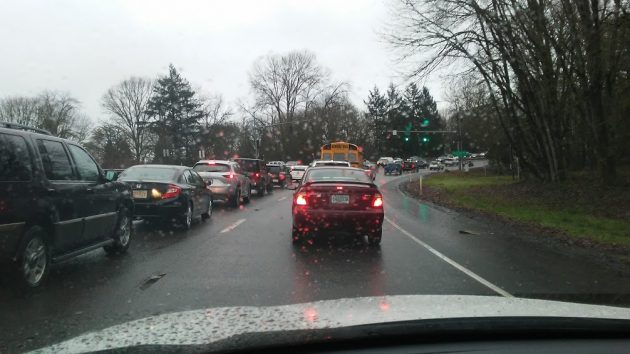 One day in February 2019: Congestion on Hwy. 20 heading into Albany.

If you’re stuck in the occasional afternoon traffic jams on Highway 20 before crossing the Willamette River, you’ll be interested in ideas for increasing the road’s capacity in the next few years.

But first, of course, there has to be a study. During its work session Monday, the Albany City Council will be asked to authorize the city staff to solicit proposals for a “refinement plan” for Highway 20 from North Albany Road across the river and through downtown to Ninth Avenue.

The plan would be evaluating measures to allow the highway, including the downtown couplet of Lyon and Ellsworth Streets, to handle more traffic. The idea is to study measures that could be carried over within five to 10 years.

What are some possible measures to accomplish that? A staff memo to the council lists six:

♦ Update the controllers of traffic signals.

♦ Connect all the signals along the route.

♦ Improvements to allow the use of adaptive signal timing. Presumably that allows the signals’ phases to respond to traffic flow.

♦ Add a second right-turn lane from First on to the Lyon Street Bridge. This would shorten the backups on First during peak traffic periods.

♦ Add a second left-turn lane from Spring Hill Drive on to Highway 20. (This worked well during the North Albany Road reconstruction a few years ago, but ODOT would not allow it to remain when the construction was finished.)

♦ Add turn lanes from Lyon and Ellsworth to some of the side streets.

The memo doesn’t say how long it would take for a consultant to evaluate these ideas, let alone to carry them out if they show promise, or what they would cost. But as for the proposed study to check this out, the staff says the city has enough money from transportation systems development charges to pay for the planning. (hh)