With too much time on my hands, I scanned the revised Albany sign code that city officials and their consultants have been laboring for months to produce. Hard as I looked, I could find no mention of the latest in business promotions: robot sign wavers like the one above.

Ten or 15 years ago, if memory serves, At Home Furniture on Ninth Avenue S.E. became the first Albany business to employ sign wavers — human beings employed to stand on the curb and twirl signs to catch the attention of people driving by.

You can still see them in various places along the main drags. But now, it appears, humans are beginning to be replaced in even that form of work.

On Amazon and eBay, and probably elsewhere online, you can find deals on mannequins to wave your signs.

“Without all the headaches of a sign spinner,” one ad claims.

“Save money,” says another. “Full-time sign spinner, saving over $25,000 a year in payroll expenses.”

New, these things apparently cost around $2,800. But on eBay Friday, you could get a couple of used ones for about $600 each.

On Friday, driving down Ninth Avenue, I have to admit that the blonde waving a sale sign outside At Home furniture caught my eye, for a split second at least, until I realized it was a doll.

What comes to mind, right after the loss of jobs for people who haven’t found anything else, is how this squares with the campaign against distracted driving.

The changes are intended to make the regulations neutral in regard to what signs say, in line with the First Amendment and a recent court decision. The city will still regulate the bejeebus out of signs — how big they can be, where they can be put, how long they can stay, and so forth. But as for content, the city won’t care.

But when machines take over the waving, aren’t they just freestanding signs that move? So does the code apply to them? (hh) 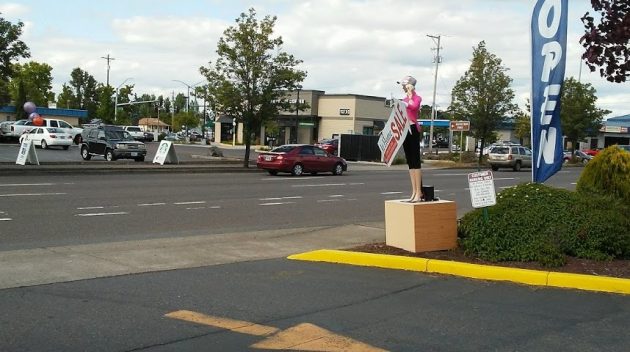 There she is, trying to catch the attention of drivers on Ninth Avenue S.E. on Friday afternoon.