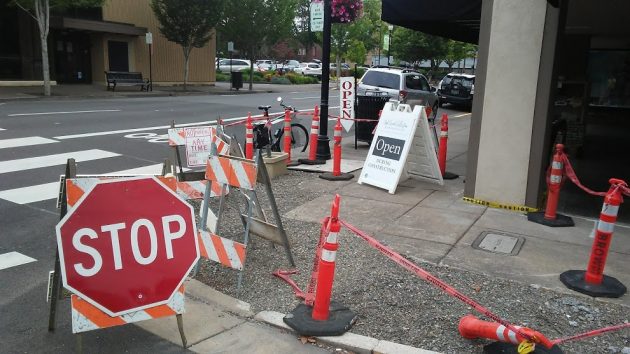 The unfinished sidewalk ramp on the northwest corner of Fist Avenue and Broadalbin Street on the afternoon of Tuesday, May 28.

It seems like forever that the sidewalk has been torn up on the northwest corner of Broadalbin Street and First Avenue in downtown Albany. What happened, why is it taking so long to make repairs?

First I got the gist of the story from Larry and Summer Bumpus, who operate the shop at the corner, the Oak Creek Collection Marketplace. Then, Albany City Engineer Staci Belcastro provided the details.

What happened was that a contractor for the city was working to replace the sidewalk ramp with one that meets requirements under the federal Americans with Disabilities Act. As it turns out, the basement of the adjacent building extends under the sidewalk. This was discovered when, in Belcastro’s words, “we broke a hole in its ceiling.”

Basements extending into the public right-of-way apparently are common downtown, which Albany officials learned in 2007 when the Penney’s Building, on the same block of First Avenue, was about to be remodeled. The basement-sidewalk situation complicated that project and added to its expense.

On the corner of Broadalbin, what you might call the basement breakthrough happened in January, Belcastro recalls. As Summer Bumpus remembers it, it seems like the sidewalk has been torn up since before Christmas.

In any case, now what?

“Unfortunately,” the city engineer told me by email, “the substructure supporting the ceiling of the basement is in poor condition, so it’s not simply a matter of patching the hole in the ceiling and re-pouring the sidewalk ramp. Repairs are also required to the basement’s substructure.”

To that end, she said, the city hired a structural engineer and now has a design to repair both the hole in the ceiling and the basement’s substructure.

“Since the substructure damage is an existing condition, we have asked that the property owner sign paperwork that will indemnify the city from being responsible for its condition, and any resulting damage to the building. As soon as the city receives the signed paperwork we will move forward with making the repairs.”

The building on that corner was built in 1890, according to Linn County tax records. The assessor’s records name Linda Poris, of Albany, as the owner.

Customers do have access to the corner shop, which features a wide variety of items from gifts to home decor and furniture. But the Bumpuses say all those construction barriers and “sidewalk-closed” signs out front may have cut into their business. So you have to hope that if it isn’t already, the “paperwork” will be settled soon. (hh)