Sewer project on the Clark Path 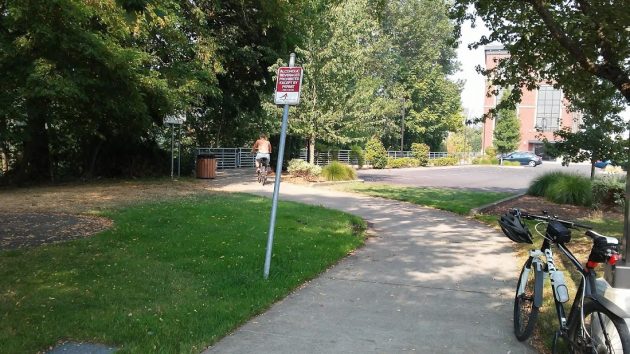 Shot on Aug. 8, this is the spot on the Clark Path where the city plans to build a sewer lift station.

City engineers in Albany are planning a $13 million sewer project they hope will prevent overflows into the Willamette River during heavy wintertime rainstorms. It will also force a change in the riverfront Dave Clark Path and, likely as not, cut into new pavement on Water Avenue.

The city plans to build a “wet weather lift station” on a 32-by-40-foot site across the Clark path just west of the Wheelhouse parking lot. From the lift station, it plans to construct a sewer “force main” down Water Avenue all the way to Geary Street, and from there down Front Avenue toward the Davidson Street gate of the Albany-Millersburg sewage treatment plant.

The project is intended to take some of the load off the city’s biggest sewer, the Riverfront Interceptor built in the 1950s to drain most of central Albany. During heavy storms, the Interceptor occasionally overflows into the Willamette, a violation that could subject the city to state enforcement action.

The project has not yet been designed. When it is, it will presumably include a way for the popular walking and bike path to continue around the new lift station.

The eastern few blocks of Water Avenue were repaved in 2013 and 2014 at a city cost of about $285,000. This was done in conjunction with the Portland & Western Railroad rebuilding its track running down the middle of the street. Jeff Blaine, director of public works engineering, says the repaving “was not intended to be a long-term solution like you see for our major reconstruction projects.”

When the construction is done, in a year or two, it likely will also affect the Hill Street intersection of Water, now being rebuilt by the developer of the Edgewater Village project.

This week, the Albany City Council approved an agreement calling on the city to borrow $13 million to pay for the sewer project. The loan from the state Department of Environmental Quality is for 20 years at 1 percent annual interest and a 0.5 percent fee on remaining principal. This yields an annual debt payment of about $750,000. The cost to the city will be more than offset by the expiration or reduction in payments on previous city debts, the council was told.

This big sewer project is necessary to fix a recurrent problem, overflows into the river, so the disruption it will cause can’t be helped. Let’s just hope that the problem really will get fixed once and for all. (hh)

9 responses to “Sewer project on the Clark Path”