Saving this relic may cost the city – Hasso Hering

Saving this relic may cost the city

The city says it has spent $18,000 over the last three years on the former Cumberland Presbyterian Church, but evidently not on this corner

The former Cumberland Presbyterian Church, 124 years old, is in the news again as the city of Albany is trying to decide how to unload the property and get the historic structure restored at the same time.

in February 2015, the city council authorized giving the building at 401 Main St. S.E. to a small charity, Good Samaritan Ministries, for a token $111 after the group said it would make an estimated $157,000 worth of repairs over five years. At the time the council spurned another offer, by an investor who wanted to buy the property for $16,500 and said he would renovate the building for more than $240,000 so it could be rented for weddings and events.

The charity deal never got off the ground.

This past March I talked with Alex Contreras, a native of Costa Rica who runs the Universal Coffee shop in the Carriage House Plaza, across Santiam Road. He and his wife rented the former church for storage. His vision was to turn the building into kind of a cultural center, using coffee, music and art to provide a bridge between Latinos and the rest of the community.

The city bought the property for $150,000 in 2000, using street bond funds, thinking it would be needed for rebuilding Main Street. But the street plans changed and the property became surplus.

On Monday, the council will get a recommendation from the city staff to once again solicit proposals from people interested in buying and doing something with the building. “There may be an impact on CARA or Economic Development funds depending on the structure of the request and direction of the council…,” it says in a staff memo to the council. That sounds like a hint that not only will the street fund not get back the $150,000 spent in 2000 — that much seems obvious — but that disposition of the building will cost taxpayers a chunk of additional cash. (hh) 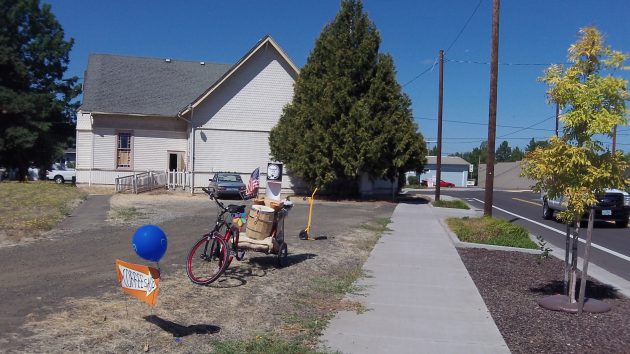 A side view of the historic structure at Main Street and Santiam Road.

11 responses to “Saving this relic may cost the city”