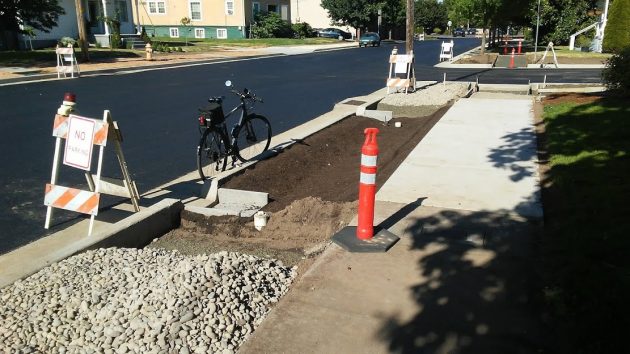 The reconstructed Ninth Avenue has stormwater swales like this one at the intersection with Willetta Street.

There’s nothing like a new layer of smooth asphalt to tempt this bike rider to try it out, so that’s what I did on Tuesday night before the sun went down.

A contractor for the city, K&E Excavating of Salem, is rebuilding the five blocks of Ninth Avenue from Elm Street to Broadway Street and replacing a water main with a bigger one. The contract of just under $1.4 million includes sidewalk repairs, storm drains, landscaping, and other details.

As of Tuesday, the segment from Elm to Takena Street — about half the job — had been freshly paved. I had to try it out, and you can see how it went in the video below, shot with my phone.

A smooth new street like this must make residents in other parts of old Albany envious. Some of their local streets are little more than a network of patches, potholes, and bumps.

Albany does have money for projects on major streets, such as this one on Ninth. But local streets, especially some of those east and west of the downtown Highway 20 couplet, never make the list.

The city council occasionally takes up the subject of trying to raise more money for local street repairs, but so far without result. (hh)