‘Salmon’ riders can kill you 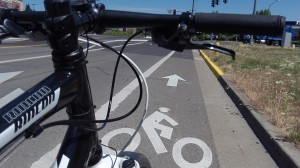 There’s a reason for the arrow in the bike lane graphics.

The next time somebody claims it’s safer for bicyclists to ride on the left side of the road against the flow of traffic, you might bring up a newspaper report from Pasadena on July 17.

The story in the San Gabriel Valley Tribune — pointed out by the BikingInLA blog — said that a 20-year-old man injured in a collision with another bicyclist had died. The collision happened at about 6 p.m. on Sunday, July 14, in plain daylight. The 20-year-old was going down a street with the flow of traffic when a 17-year-old on a bike came the other way and both collided head-on. The older rider was not wearing a helmet, and his head hit the pavement.

According to the newspaper report, the police in Pasadena were still investigating. Depending on what they conclude, the younger rider could face very serious charges because it was he who was riding unlawfully. Just like in Oregon, cyclists in California are required by law to ride on the right side of the road, and as far to the right as practical.

In the mid-valley, unfortunately, it’s not exactly rare to see young people on two wheels going the wrong way. By riding upstream, they are behaving like salmon on their way to spawn and to die. But as the Pasadena story shows, it’s not necessarily the wrong-way rider who pays the deadly price. (hh)