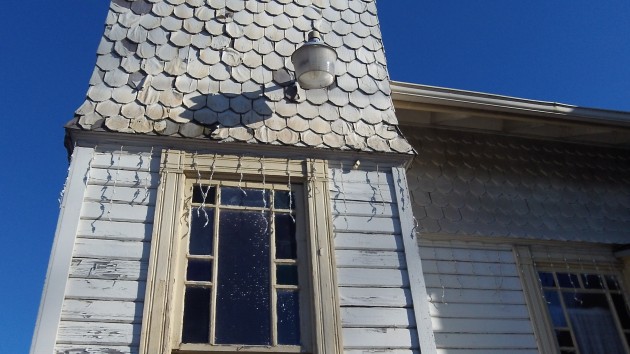 The old structure at Main and Santiam will need plenty of work inside and out.

So yes, Good Samaritan Ministries Albany will get a chance to take on the project of restoring the crumbling Cumberland Presbyterian Church at 401 Main Street, but not right away. First there is the city land-use permitting process to overcome, and that’s expected to take three to four months.

The city council Monday agreed with a staff recommendation to give the historic and long-vacant church to the religiously oriented group for $111, as the group proposed. GSM plans to restore the 1892 building over the next five years,or so, paying for the work with donations and grants, and use the building as the headquarters for counseling and other support programs, especially for people in the neighborhood.

The council wants two conditions: Completion of the land-use process before the sale is done, and a provision that the building would go back to the city if the organization fails to follow through. Details would be worked out in a contract between GSM and the city.

The building has been vacant for years, so it apparently needs a conditional use permit to be operated for the programs GSM intends to run there. As part of that, the organization will have to formalize agreements with Carriage House Plaza, across Santiam Road, and the Whitaker’s paint and floor covering store, across Main Street, to use their parking spaces when they’re not otherwise needed.

The city bought the propperty for $150,000 in 2000, thinking the lot would be needed to reconstruct the Main-Santiam junction, but the plans changed by the time the project was done in 2014 and the property was declared surplus. City maintenance expenses on the structure averaged $7,000 over the last few years, according to the staff.

A couple of points that occurred to me: Since the sale won’t be done until the conditions are met, it’s the city as owner that will have to file the permit application, meaning the city will conduct that process gratis, without the usual filing fee. But on Monday that subject did not come up. Also not discussed: Why it should take three to four months to process a noncontroversial permit. (hh)