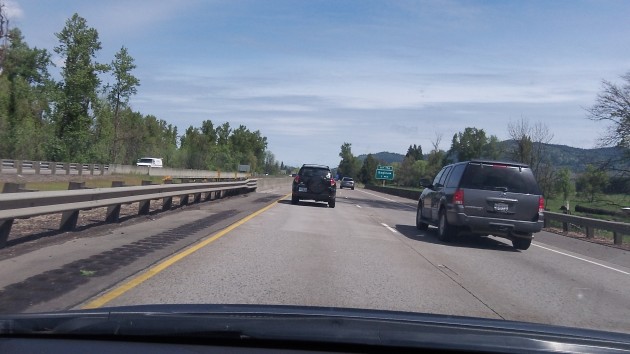 So what’s wrong with using the left lane on freeway segments like this in Lane County?

In the Keeping-Track Department: The right-lane bill in the Oregon legislature is advancing, and there’s no evidence that lawmakers are paying the slightest attention to reasonable objections.

In April the House passed HB 3414 by a vote of 33-26, with Republicans opposed, and the Senate Business and Transportation Committee unanimously endorsed the bill on June 1. The Senate will vote shortly.

The bill would require drivers to stay in the right lane on highways with two or more lanes in the same direction and speed limits greater than 45 miles an hour, except when passing, turning left, to avoid merging traffic, in congestion, or when following signs. It’s supposed to keep people from hogging the left lane and holding up traffic. It may be a good idea in theory, but not every idea has to be a law.

The practical effect will be to make the freeways more dangerous. Imagine trying to observe this law on I-5 between Salem and Portland, with three lanes in each direction and an on-ramp every couple of miles. No longer can you legally stay in the middle lane and avoid all that incoming traffic. You have to drive to the right and change lanes, slalom-like, every couple of minutes.

There and elsewhere on the freeway, if the left lane is fairly open and the right lane crowded, the bill says you can’t use the left lane unless you want to pass. The problem on our two-lane freeways is trucks and motorhomes. They generally are slower than other vehicles, so when truck traffic is heavy, which is much of the time, you have to stay in the left lane just to keep your spot. If you pull to the right after passing a truck, you may not be able to pass the next one for quite a while without pushing your way into the line on your left, risking your life and theirs.

And what about those freeway segments where the right lane has been chewed up and the pavement is rough? Why shouldn’t we drive where better pavement makes for a smoother and less noisy ride?

The Highway Division says that if the bill passes, the legislature might want to budget for new signs to remind people of the new requirement, especially on the freeways. Just what we need: More rules, more signs and more expense. (hh)