Rocks in a hard place: No more camping 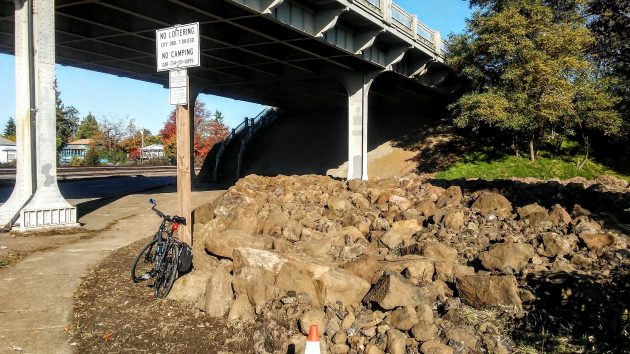 A field of boulders now reinforces the message on the sign: No camping under the Pacific Boulevard viaduct.

Some 522 tons of rocks and boulders have put a stop — for now at least — to a longstanding problem: Squatters camping under the Pacific Boulevard viaduct in Albany where Jackson Street and Seventh Avenue meet.

Someone pictured the rocks on Facebook, and a bike ride this afternoon took me past the place to see for myself.

This used to be a frequent hangout for apparently homeless people who couldn’t or wouldn’t go to the nearby shelters, Helping Hands just around the corner and Signs of Victory a couple blocks down Jackson Street.

So what about those rocks? Assuming that either ODOT or the city of Albany had placed them there, I asked Marilyn Smith, the city’s public information officer, what she knew about it. Turns out she knew everything about this project and how it came about.

“City staff first started talking about it in June as an option to fencing for dealing with ongoing complaints of illegal camping and litter under the overpass,” her report began. “It had become one of the spots in Albany where homeless campers come and go and leave trash behind, often hazardous trash, and we repeatedly have to clean up at public expense.”

Kris Schendel, an employee of the police deparrment who serves as a code compliance officer, proposed the boulder field, and City Manager Peter Troedsson authorized it. The area under the viaduct is part of the state highway right of way, and the city got ODOT to approve the project. ODOT also specified the type, size and quantity of rock that have proved best, based on experience elsewhere.

Albany bought the rock from Knife River in Tangent. The company delivered 521.93 tons of rocks. (Leave it to Marilyn to know this to the second decimal!)  City crews put the material in place on Oct. 15 and 16.

A few days before, the city’s Solutions Team had gone to the place and talked with three or four people there, giving each a list of resources and directing them to a shelter or other services. (The team has been working to help get the homeless off the street and into better situations. It has members of the city police, county mental health, Samaritan Health Services, and CHANCE, and a paramedic.)

This boulder field is hard to miss. But as Marilyn Smith points out, city crews clean up homeless camps in less visible places all the time. (hh) 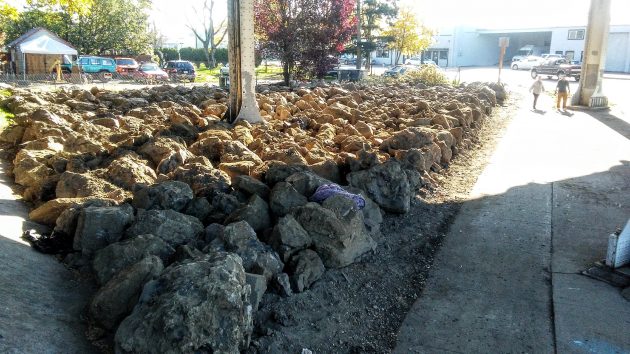 Let’s hope the blanket lying on the rocks doesn’t mean someone tried to sleep there.


27 responses to “Rocks in a hard place: No more camping”