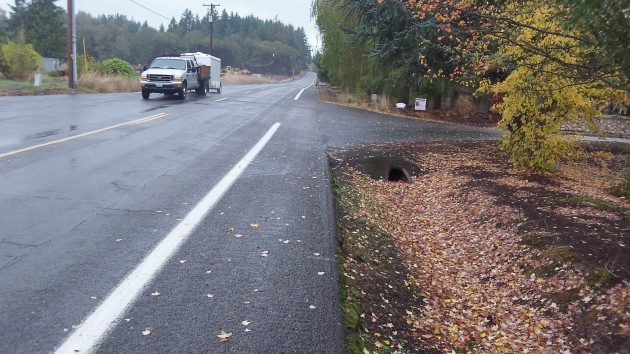 Crocker Lane. A ditch on the other (west) side drains into a wetland.

At the risk of getting lost in this regulatory swamp, let’s take a look at yet another complication arising from the morass of wetlands rules. This one is causing a year’s delay in Albany’s project to rebuild the northern stretch of Crocker Lane.

Public Works Director Jeff Blaine told the city council last week that the street project in North Albany would likely be moved to 2017 instead of being done next year and a wetlands-permit issue was the reason. For the details he referred me to city engineer Chris Cerklewski.

You might wonder how a seasonally dry roadside ditch would interest any state agency. Here’s what Chris told me by email: “The Oregon Department of State Lands claims jurisdiction over non-wetland ditches that drain into wetlands immediately downstream unless the water enters a piped storm drain system first. The ditch on the west side of Crocker Lane drains directly into a wetland along the natural drainage between Squire Street and Meadow Wood Drive, so we will need to get a permit from the State prior to putting the project out to bid. The U.S. Army Corps of Engineers will probably claim jurisdiction over the ditches as well.”

A day or so later, in a light drizzle, I wandered up and down Crocker taking a closer look. There are plenty of places where water collects around and between the housing that’s sprung up there. But unless the road construction threatens to wipe out significant wetlands, it’s hard to see why the state would require a permit. And how did our federal system of government erode to the point where a North Albany ditch falls under the jurisdiction of the Army Corps of Engineers? (hh)