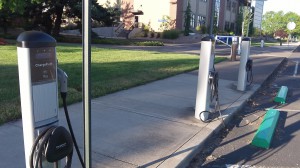 Once again, the 2013 legislature has failed to resolve the issue of how to get road tax revenue from motor vehicles that don’t use motor fuels, or use very little of it.

House Bill 2453 called for a road user tax to be paid by the owners of very high-mileage vehicles, which by and large means electric vehicles. The bill called for a road tax of about 1.5 cents. After lots of work, it had passed the House Transportation Committee and the joint Ways and Means Committee and was scheduled for action on the House floor. But on July 7, the day before the legislature adjourned, the House sent the bill to its Revenue Committee, where it died when legislators called it quits on July 8.

The state has struggled with the issue since 2001, when the legislature created a road user fee task force. The problem is that the gas tax, which pays for roads, has not kept pace with expenses of the road system since vehicles have become more fuel-efficient. And if electric cars ever take off in a big way, the problem will become acute.

The trouble is that nothing is as efficient and easy as collecting a gas tax for every gallon sold. The road user tax would have to be collected some other way, maybe via meters at charging stations. Or perhaps owners of high-mileage hybrids could pay the tax annually. For now, this problem remains for another day. (hh)

From Shane Northern, via Facebook: Toll roads wouldn’t require new technology, would be easy to implement, and would be fair to all road users.