Written May 13th, 2021 by Hasso Hering
Comments: one response. 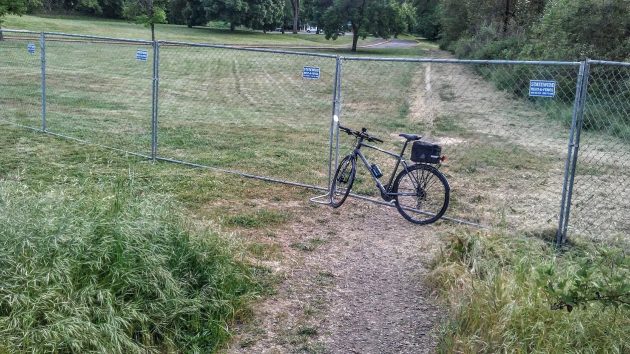 Stopped by a fence Thursday night: On the other side is Bowman Park.

In a story on April 25, I wondered whether the trail along the Willamette River between Bowman and Simpson parks would stay open during the construction of The Banks, a 120-unit apartment complex. As of Thursday night, the answer was yes and no.

The bike took me to the 6.2-ace apartment site across Geary Street from Bowman. I reached the riverside trail from Linn Avenue and Eads Park, then headed west along the bank. An erosion barrier had been placed along part of the unimproved trail, but there was no problem getting through.

At the west end, though, the chain-link fence that lines the site’s perimeter cut right across the trail and extended into the underbrush. People had trampled a narrow path around the end of the fence. But with a bike there was no getting through. Not impossible, but not worth the effort. So I turned around and went back to Eads Park.

There has long been a public-path easement along the riverbank. Maybe the erectors of the fence didn’t know that.

The apartment developers, Willamette River View Holdings of Salem, are required to dedicate a 16-foot easement for a public path along the riverside. So public access will be retained when the apartments are finished. That’s nice.

But with its berry bushes and other riverside plants, that well-worn dirt trail was pretty nice too. (hh) 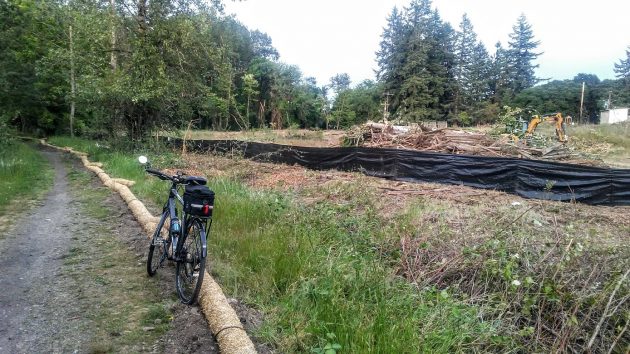 Looking east on the riverside trail along the construction site of The Banks.


One response to “Riverside trail: Passage blocked at Bowman”