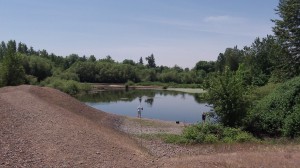 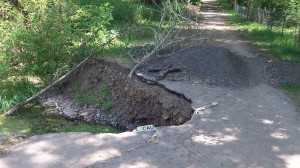 You couldn’t use the drive even if the gate were opened.

It’s been years since the public could drive down to the Willamette River at Truax Island. We still can’t, and we won’t be able to do so again any time soon. For that we can thank criminals.

The Oregon Parks Department used to maintain a little parking lot at this spot in the Willamette River Greenway, off Riverside Drive and seven river miles upstream from Albany. But as explained by Julie Whalen, the state parks manager who oversees the site from her base in Lowell, vehicle access was barred some years ago because of frequent drug activity and other crimes in this out-of-the way spot. She says the decision to close it was made in cooperation with the Linn County sheriff and a neighborhood watch group on Riverside, and there are no plans to make any changes now.

The gate off Riverside will remain closed. But there’s room for a handful of cars to park there so people can walk down to the ponds in the former Morse Brothers and now Knife River gravel pits (the company still owns and could reopen them), and to the river itself farther on. On a recent bike ride, the only people I saw down there were a couple angling in one of the ponds.

Last winter, flooding nearly cut the access road itself, and there are no plans to repair that either. But on foot or on a bike you can get through. (hh)