Written May 8th, 2021 by Hasso Hering
Comments: one response. 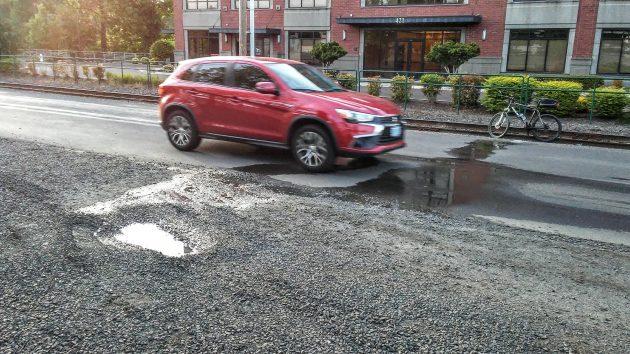 May 5 on Water Avenue: That pesky puddle was still there.

We may or may not come back to important matters. But in the meantime, here’s an update on a perplexing puzzle along Albany’s Water Avenue: The puddle that won’t go away.

This particular puddle made for a story on hh-today last Dec. 13, which must have been another slow day. The puddle is between Parr Lumber on one side of the street and the Wheelhouse parking lot on the other.

City officials explained at the time that they had tried to find the source of the apparent leak in the 12-inch cast iron water main that runs along Water Avenue. They had not found it, they said, but they would try again once the water table had gone down, making leaks easier to find.

I figured that’s what a crew was doing when the bike took me past the spot on April 28, as it does several times a week: 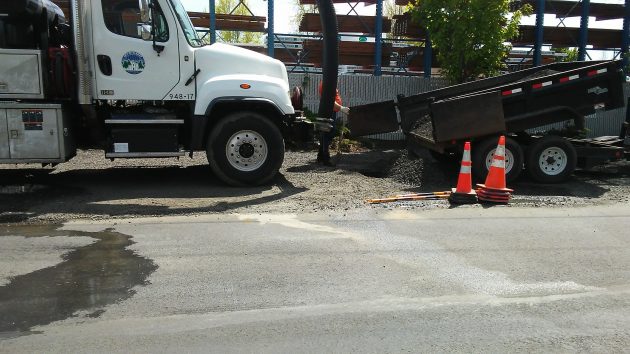 The men had excavated the spot and were filling it again when I came by.

They told me the leak was where two sections of the main are joined. And I took it that they managed to stop it.

But evidently not, as the May 5 photo at the top suggests. The puddle was definitely back.

Don’t get the wrong idea about this. The leak is minor, noticeable on dry days because it makes a puddle on the surface and then trickles across the street.

As a whole, the Albany water system has achieved a remarkable improvement in the leak department from years ago when it lost something like one-fourth to one-third of the water leaving the treatment plant.  At a recent briefing, Chris Bailey of Public Works said water losses in the system had been reduced to around 10 or 12 percent, which is considered very good.

To get there, the city has had a program of replacing old pipes as fast as the available money allows. Just about every time a street is repaved or rebuilt, the water main underneath is replaced as well. (hh)


One response to “Revisiting a perplexing, puzzling puddle”