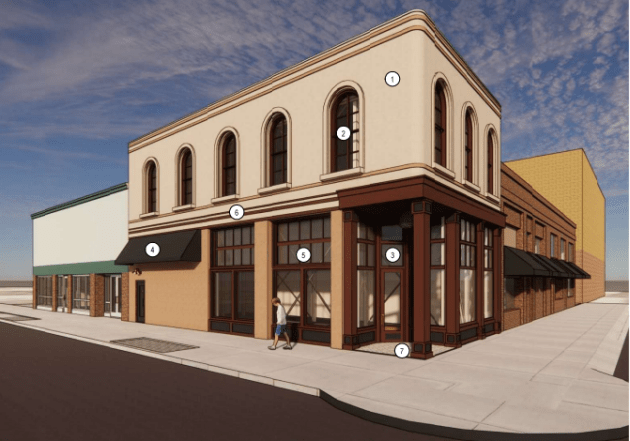 Varitone Architecture created this rendering of what the building at Ferry and Second is to look like.

An empty building in Albany’s Downtown Historic District would be restored pretty much to look the way it did a century ago, according to plans submitted to the city’s planning division.

The address is 401 Second Ave. S.W., the northwest corner of Second and Ferry Street, formerly the home of a succession of businesses, most recently a hair salon.

The place has been unoccupied since Nov. 2, 2017, when the roof of the two-story structure partially collapsed. Last year, in June, Beverly Bartley-Nagamoto, of Corvallis, bought the property for $325,000, according to Linn County’s tax department.

Different sources give different dates for when the building was constructed. The paperwork filed with the city says it was around 1877, when it was built as a furniture factory complete with a turbine powered by water from a flume fed by the canal on Eighth Avenue, six blocks away.

(How many Albany industries were built based on water power in the 19th century is a subject for another day.)

By the late 1920s, the building had become Martin Ludwig’s plumbing business. Later it was remodeled to take on the “modern” appearance it has today. Some still call it the Martin Ludwig Building, others the Ferry Street Building, take your pick.

The owner and Varitone Architecture, an Albany firm based downtown, are seeking approval from the Albany Landmarks Commission for exterior changes to the building and the use of substitute materials.

They want to reestablish the tall storefront windows of Ludwig’s day, as well as the arched windows on the second floor. The window openings still exist but have been covered up.

The building has brick walls covered with stucco. Removing the stucco would likely damage the bricks, so the applicants would like to keep the stucco walls and paint them.

For the window frames and such, they want to use Boral, a durable composite material that has the appearance of wood and can be worked with customary wood tools.

The application says the owner envisions a business on the first floor and residential use on the second.

The Landmarks Commission will hold a public hearing on the request at 6 p.m. Aug. 3 in the council meeting room at City Hall.

This may be a long meeting. Also on the agenda: review of Scott Lepman’s restoration plans for two other downtown landmarks, the St. Francis Hotel and the Federal Building, the former post office and then the city hall. (hh) 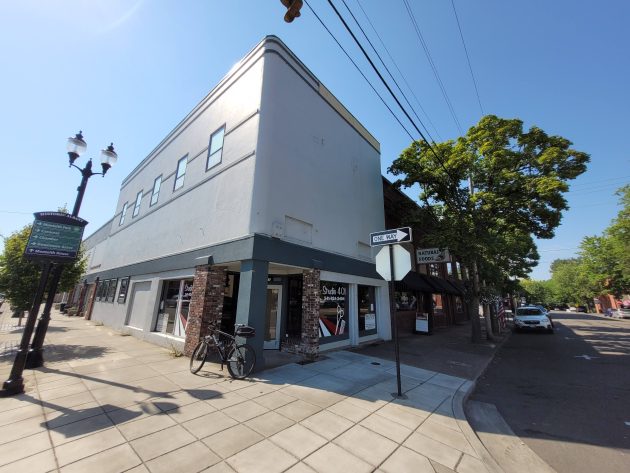 Here’s what the building at 401 Second Ave. S.W. looked like Thursday afternoon.