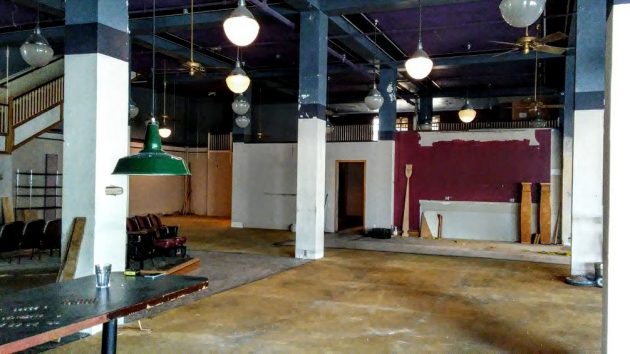 Inside the Young Building during cleanup on May 23, before the restoration got under way.

A request for a $259,000 grant toward restoring the historic S.E. Young & Son Building downtown ran into trouble Wednesday when four Albany council members said they could not or would not approve.

Four is a majority on the city council, which acts as the Albany Revitalization Agency, the board that governs the CARA urban renewal district.

Oscar and Tamalynne Hult bought the former department store at Broadalbin and Second this spring and are restoring it. They plan to move their clothing store, The Natty Dresser, to the ground floor, convert the basement to a storage business, use the mezzanine for their garment business, and develop other uses on the second floor. They arranged for private financing for most of the $1.4 million project and are asking CARA for the grant to pay for a new elevator because the old freight elevator was condemned in 2012.

On Wednesday Oscar presented their request to the CARA Advisory Board, which consists of the council and seven others.  Mayor Sharon Konopa and Councilors Bessie Johnson and Dick Olsen spoke favorably of the request, noting that regardless of the particular business involved, the CARA money would be an investment in an anchor of the downtown commercial district.

Kellum worried about the “optics” of giving away a quarter-million dollars of tax money when the city government faces cutbacks and perhaps layoffs in the coronavirus crisis.

Sykes didn’t like that the Hults have not been able to get firm bids from elevator companies because of the corona crisis.

“No way I would consider a grant,” Coburn said. And probably not even a loan, he added.

Johnson II said he couldn’t approve the request “as it sits now.”

At the suggestion of Rich Catlin, chairman of the CARA Advisory Board, Oscar Hult said he would refine his request with additional details and come back for another try.

In the meantime the Hults are going ahead with other parts of the restoration. They need the space of the Young Building because their business has expanded and their present, rented quarters on First Avenue are hopelessly cramped.

The advisory board makes recommendations on grant requests, but it’s the council members on the ADA who have the final say. (hh)