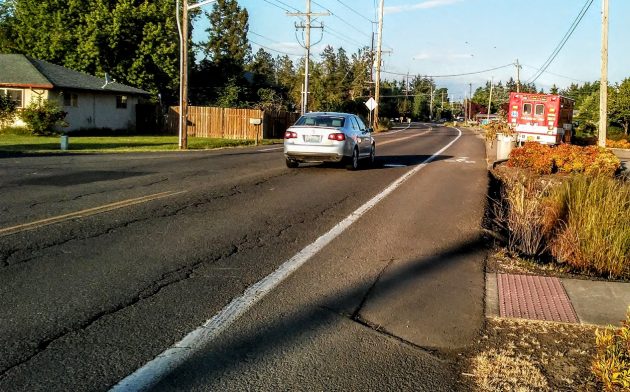 Gibson Hill Road near Fire Station 14 on Friday evening. The road’s resurfacing will have to wait.

Many North Albany commuters have learned to dodge the cracks and rough spots in the pavement on Gibson Hill Road, which is good because they’ll have to do so for at least another year.

Gibson Hill used to be a quiet county road. Then, after the annexation of 1991, subdivision construction took off in the part of North Albany within the city limits and turned the road into a heavily used traffic artery.

For years the plan has been for the county to turn jurisdiction of Gibson Hill over to the city of Albany, but the city wants the road to be improved first.

When last I checked on this, in March 2019, the county said it had to postpone the improvements until 2021 because other road needs were greater. Now the job will be pushed back another year.

“This project is a casualty of the pandemic,” Benton County Public Works Director Gary Stockhoff told me, “or at least the reduced gas tax revenue side of the pandemic.”

Rebuilding Gibson Hill is expected to cost around a $1 million, and the county doesn’t have the money to do it this year.

But, Stockhoff says, the county has cobbled together some leftover CARES funds and also has hopes for help from the local metropolitan planning organization. Together, that would cover about 60 percent of the cost. (CARES is the federal law sending cash to states and local governments because of Covid.)

“I am hopeful that we can come up with the rest in the next six months or so, which will enable us to bid the project next year,” Stockhoff wrote.

At a work session next month, Benton County officials plan to brief the Albany City Council about the delay. (hh)


3 responses to “Repaving Gibson Hill: Wait till next year”