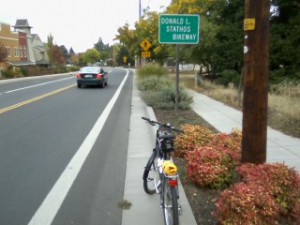 All of us bike riders in Oregon owe a debt of gratitude to former state legislator from Jackson County, the late Donald L. Stathos. I’m reminded of this every time I ride my bike from Jacksonville the four miles or so to Medford. That’s because long ago the road authorities put up a commemorative sign, naming the road the Donald L. Stathos Bikeway.

Now we have bike lanes just about everywhere on major roads, state as well as city and county, in the mid-valley as well as statewide. In 1971, Mr. Stathos got the legislature to approve the Oregon Bike Bill. For the first time in the country, as far as anybody knew, the bill required state, county and city road authorities to spend a reasonable amount of money on bike and pedestrian paths whenever a road was built or reconstructed. They are to spend a reasonable amount but not less than 1 percent of the project cost if the project is supported by the state highway fund. Road aurthorities can also save up the bikeway money they get from the highway fund in order to do a bigger project later on.

The result has been good. Most roads that have been built or fixed up in the last 40 years have at least a little space on the side where bike riders can have some confidence they won’t get run down by passing cars. This has made life safer not just for bike riders but for drivers as well.

And we can thank Mr. Stathos, a World War II veteran and graduate in business of Oregon State. A Republican and a resident of Jacksoville, he owned an insurance agency in Medford and served two terms in the House, in 1969 and ’71. He died in 2005 at the age of 81.

The bikeway outside of Medford was named for him in 1979. There and elsewhere, Oregon cyclists have reason to be grateful to him still. (hh)