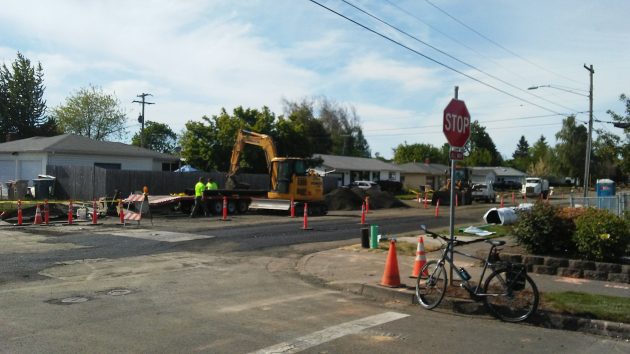 No, the city of Albany did not “take” private property for the rebuilding of Hill Street, a two-year project being completed this summer.

A few days ago, the Democrat-Herald published a letter from a reader criticizing the work on Hill Street as being more elaborate than necessary. Among the letter’s assertions was that the city had taken property from owners along the street, to the point where their driveways now were too short to accommodate their vehicles.

I wondered about this. I’m a fan of public works, especially street projects, in particular those that encourage the use of bikes for transportation. I hadn’t heard of any property acquisition needed for Hill Street. So I checked with Chris Cerklewski, the city engineer in charge of this project.

“The city didn’t need to acquire any additional right-of-way to construct the street improvements on Hill Street (either last year or the work under construction this year),” he told me via email. “The street and sidewalks were constructed within the existing right-of-way.”

According to the construction drawings, the Hill Street right-of-way is 66 feet wide.

The contract for this year’s project was awarded to Pacific Excavation, whose bid of $3,054,344 was the lowest of seven. The job calls for not just rebuilding the street but also installing a new water main, an iron pipe 2 feet across and nearly 3,000 feet long. Then, besides the new pavement, it calls for curbs, sidewalks, and landscaping.

New trees are part of it. The contract names seven different species, among them Japanese snowbell, two kinds of maple, and “city sprite zelkova.”

And yes, there will be bike lanes, just like on the segment done last year, from Queen to 24th, where riding a bicycle now feels a whole lot safer than before.

How’s the project coming, by the way, and when will it be done? Here’s Cerklewski:

“This year’s phase of Hill Street construction between 24th and 34th Avenue is scheduled to have the road back open to traffic by August 30 with all remaining work (landscaping, etc.) completed by November 8.  The contractor is currently working on completing new underground utilities (including a large diameter water main).  The bulk of the remaining street construction work will take place this summer.”

For South Albany traffic, Hill Street is a vital link. Completing this project will make it easier and safer to use. (hh) 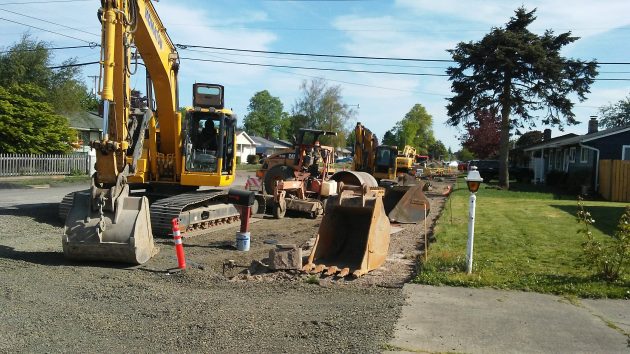 Regardless of what it looks like, the Hill Street project is being done within the 66-foot right-of-way.

9 responses to “Rebuilding Hill Street: No ‘taking’ of property”